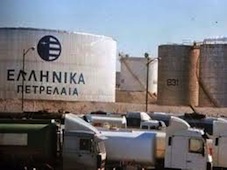 Greece’s biggest oil refiner, Hellenic Petroleum (ELPE), said on Friday, it is satisfied with the signing of an exploration rights deal for an offshore block in the Ionian Sea in western Greece.
ELPE is part of a consortium led by French multinational oil and gas company Total and Italy’s Edison, which secured the rights for Block 2, in an area west of Corfu. The deal has to be approved by the Court of Auditors and the parliament.
“An important step is being made which will be completed with the ratification of the agreement by the Greek Parliament. It is a great honor for us that we are partners with two internationally recognized companies such as Total and Edison,” the company said in a press release.
“We hope that a similar lease agreement will be signed in the coming days for ‘Block 10’ in the southern Ionian Sea, and that the Court of Audit will complete the pre-contractual audit for the areas of ‘Arta-Preveza and ‘NW Peloponnese’,” it added. ELPA also said they consider it their duty and will invest accordingly, in order to determine if and where there are exploitable hydrocarbons throughout the Greek territory.