Conference on Unification of Cyprus Is Underway 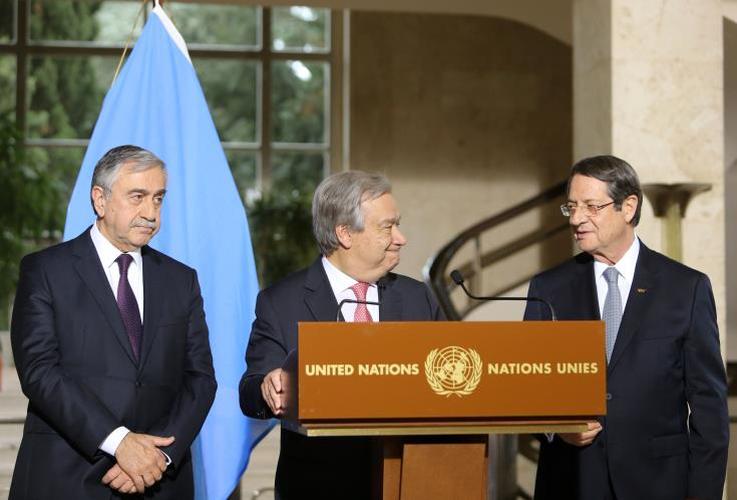 The second part of the conference on the unification of Cyprus is underway in Geneva, with the discussion between President Nicos Anastasiades, Turkish Cypriot leader Mustafa Akinci and the island’s three guarantor powers (Greece, Turkey, and the UK).
The foreign ministers of the three Guarantor Powers, Turkey’s Mevlut Cavusoglu, Greece’s Nikos Kotzias, and the UK’s Boris Johnson are meeting with the two Cypriot leaders.
European Commission President Jean-Claude Juncker and European Union High Representative for Foreign Affairs Federica Mogherini are also participating in the talks representing the EU.
UN Special Adviser on Cyprus, Espen Barth Eide, said that the EU would be called into the meetings being held between Anastasiades and Akinci and the guarantor powers as needed. Eide stated that there was no timeframe for when the discussion on the security and guarantees issue would close.
Earlier, UN Secretary General Antonio Guterres said that the participants in the conference “are not looking for  a “quick fix” of the Cyprus issue, but for “solid, sustainable solution,” for the Republic of Cyprus and its communities.

After the first part of the meeting, Greek Foreign Minister Nikos Kotzias told reporters that a team of experts will be asked to prepare for the foreign ministers’ meeting that could take place on January 23, a date not confirmed yet.

The foreign ministers of the three guarantor countries had their first meeting about security issues. Kotzias said that the issue that continues to be the stumbling block is Turkey’s insistence on maintaining troops on the northern part of the island. Greece insists that Turkish troops must depart from the island.