GRNews
GreekReporter.comGreek NewsArchaeologyGreek Archaeologist: Another Monument Might be Buried at Amphipolis

Greek Archaeologist: Another Monument Might be Buried at Amphipolis 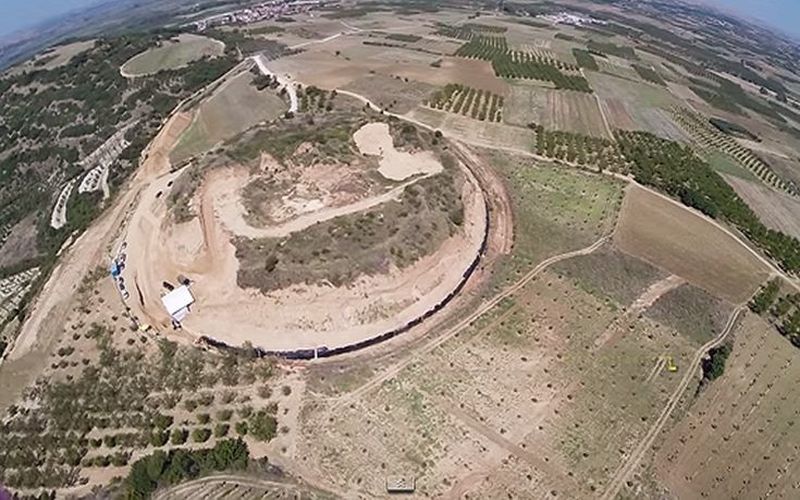 A second, much smaller, monument is likely to be buried at the Casta Hill tomb site in Amphipolis, Greek archaeologists believe.
According to an ANA-MPE news agency report, there is the assumption that there is another tomb, west of the one discovered and buried two meters deep.
A geophysical survey has been carried out by the Laboratory of Applied Geophysics of the Aristotle University of Thessaloniki and the laboratory director, Grigoris Tsokas, gave a speech called “How to detect buried antiquities: the secrets of the Casta Hill in Amphipolis” in which he claimed there is a need for further excavation on the site.
“We have a three-dimensional representation and the distribution of resistance shows that there is something there. We guess there is a second monument, far smaller than the one found, that has been found at a depth of about two meters and it should be investigated,” Tsokas said.
The geophysical survey showed there is a buried ravine on the northeast side, which has been covered by a manmade embankment.
“The geophysical study of Casta Hill was commissioned to our workshop in 2014 and the university has funded the research in full. We have already explored the hill and processed the data, which is difficult because of the volume, and have found some additional data. An excavation permit is needed and now we are trying to find the funds to continue.”
More specifically, Tsokas, said, a piece of coal was found in the foundations, indicating that the monument was built around 300 BC, give or take 30 years.