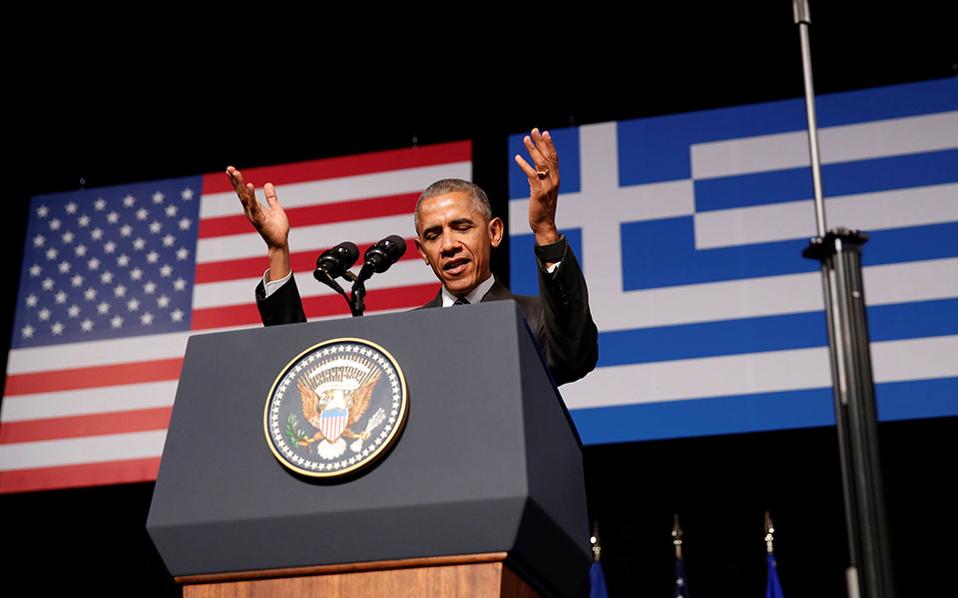 U.S. President Barack Obama praised Greece as the place where the flame of democracy was ignited 2,500 years ago, in his speech at the Stavros Niarchos Foundation Cultural Center on Wednesday.
This was the final speech abroad of the outgoing American President. In his speech, he stressed the need for debt relief and reforms in order for the Greek economy to recover.
President Obama’s speech was an ode to democracy and its origin in Greece. He spoke of the importance of democracy in the difficult times of globalization, recession, local wars and the refugee crisis. He stressed the importance of democracy and said that America’s friends are only democratic societies with democratic governments. “Democracy is stronger than organizations like ISIS,” he noted.
He spoke about the recent U.S. elections and the need to respect the results and work for a peaceful transition between the two administrations, despite ideological differences, since this is what democracy is all about.
Obama praised the compassion Greeks showed and their generosity to refugees and stressed that the country should not bear the brunt of the refugee crisis alone. He said that compassion is found only in democratic societies, and Greece is a democratic society.
Obama said that he was inspired by the words of the elderly woman who had bottle-fed a refugee infant on Lesvos island, who had said that we all bask under the same sun, we all fall in love under the same moon.
Referring to Greece’s economic crisis, the U.S. President said, the first step is to bring Greece back to the global economy. He said that governments should not be bloated, and stressed the need for reforms, regardless of how painful they are. Part of the highlight of my visit was to highlight to the world the efforts Greece has made and the reforms it has implemented so far.
At the same time, he said he will try to persuade creditors to take the steps needed for economic recovery, such as debt relief. “Young people need to know that they have a future here in Greece,” he said.
“Nothing can break the spirit of Greek people,” Obama said, amid applause, stressing the sacrifices Greeks have made so far. “A good economy is needed to preserve democracy,” he stressed.
Governments should be responsive to their citizens and hear them out and tend to their needs. He praised the European Union and its achievement and the importance for a strong, prosperous and democratic Europe.
The American President said that his faith and confidence in democratic ideas and universal values and justice still guide him. In every corner of the world there are people who have what the Greeks call “filotimo,” he said.
The most important title is not that of the president or prime minister; the most important title is citizen, he said. Because it all comes from “δήμος” (the collective of citizens) and ended his speech with “Ζήτω η Ελλάς,” (Long live Greece)
Watch full speech below: