GRNews
GreekReporter.comGreeceGreek Team Are the First to Open the Tomb of Jesus Christ 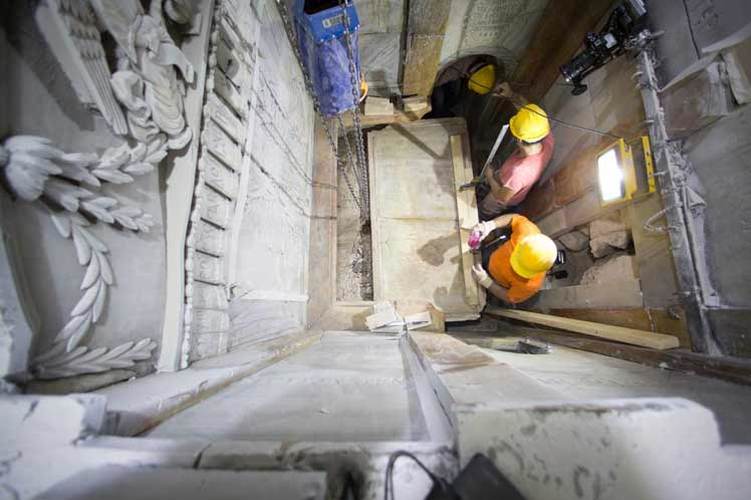 A Greek team are the first to have exposed the original rock where Jesus Christ is traditionally believed to have been buried in Jerusalem. The conservation project headed by the team from the National Technical University of Athens in Greece will gain access to the substructure of the shrine to restore it.
Fredrik Hiebert, the archaeologist-in-residence at the National Geographic Society, said that the Greek conservation group are the first known to access the area. Workers have already removed the marble slab that covered the “burial bed” where Jesus Christ was rested after being crucified. The Greek scientists working in the area were surprised at how much of the original cave structure had remained.
National Geographic, which partners the project at the Church of the Holy Sepulchre, has been documenting the restoration work being carried out by the Greek specialists and celebrates that “the exposure of the burial bed is giving researchers an unprecedented opportunity to study the original surface of what is considered the most sacred site in Christianity”.
The National Geographic states that the original rock surface has been covered with marble slabs since at least 1555.The marble slabs have weakened over the years through damage caused by the thousands of people who visit daily. These now need to be painstakingly dismantled and rebuilt, and broken and fragile parts will need to be replaced as other marble areas are cleaned while the structure supporting them is reinforced.
The 19th-century shrine over the site of the cave where Jesus is believed to have been buried is visited by many tourists and pilgrims and outer structures cover the inner areas all the way to the tomb like a Russian doll. The restoration project at the site is surrounded by a structure called an edicule at the center of the church at Jerusalem’s Old City, underneath its dome.
The restoration project will be completed around March 2017 in time for Easter. The project required the agreement of the denominations that share the church, and is being funded by the Greek Orthodox, Franciscan and Armenian churches as well as public and private contributions, and it required the agreement of the various Christian denominations that share the church for it to take place.