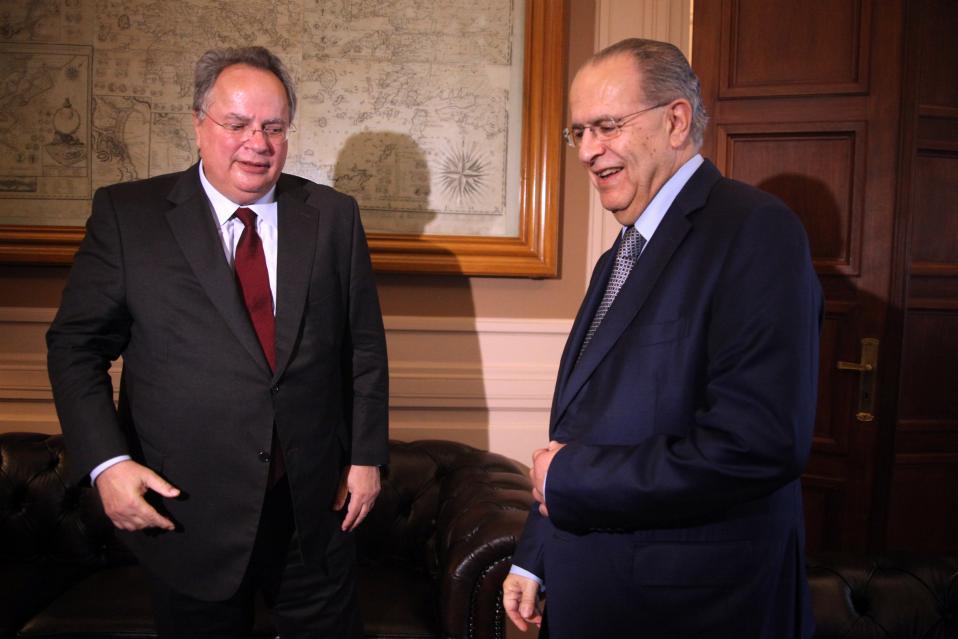 A trilateral meeting took place in New York on Wednesday between the Foreign Affairs Ministers of Cyprus, Greece and Palestine, on the sidelines of the UN General Assembly. The three men – Greek FM Nikos Kotzias, Cypriot FM Ioannis Kasoulides and Palestinian FM Riad Malki –  issued a joint communique after the trilateral meeting that focused on wide-ranging discussion on issues of mutual interest, such as developments in the Middle East and their impact on the wider region, the Israeli-Palestinian conflict, the Cyprus issue, as well as areas for future trilateral cooperation.
The three ministers underlined the strength of their countries’ historical relations and their determination to enhance these relations within bilateral and multilateral frameworks. They reaffirmed the commitment of their Governments to mutually acceptable, political and inclusive solutions on the basis of international law and the relevant resolutions of the UN and joint cooperation for the promotion of peace and stability in the eastern Mediterranean region.
They stressed the urgent need for intensification of efforts by moderate actors to tackle the regional challenges, jointly fight against terrorism, extremism and incitement to violence, increase information sharing and promote regional security, long-term stability and prosperity.
They called for just, comprehensive and lasting peace in the Middle East based on the relevant United Nations Resolutions, the Madrid principles including land for peace and the Arab Peace Initiative. They expressed their support for a two-State solution on the basis of the June 4, 1967 lines, leading to a sovereign, independent, viable and contiguous State of Palestine with East Jerusalem as its capital, living side by side in peace and security with Israel and its other neighbors. They expressed their serious concern that current trends on the ground threaten to a make a two-state solution impossible, reiterated in this regard that all settlement activities are illegal under international law, and stressed the need for affirmative steps to halt and reverse these trends. Welcoming, in this respect, current efforts, including by France, to revive the peace process, they concurred that a permanent solution to the Israeli-Palestinian conflict in accordance with international law would greatly boost security and stability across the region and beyond.
They reaffirmed their unwavering support to the ongoing negotiations for a solution to the Cyprus problem that will reunify the island in accordance with international law and the relevant UNSC Resolutions. They highlighted that the solution of the Cyprus problem must address the concerns and aspirations of the Cypriots themselves,without any rights of military intervention, and must respect the sovereignty, independence and territorial integrity of Cyprus.
They stressed that peace agreements in all their aspects, including as regards security arrangements, must be in line with the Charter of the United Nations and the principles of international law.
Convinced of the potential of their trilateral cooperation, Cyprus, Palestine and Greece will continue working together, for the benefit of their peoples and the wider region, to effectively promote their common values and interests, including cooperation in international fora and organizations as well as on projects inter-alia in the fields of tourism, education and training, environment, conservation and management of water resources, energy and agriculture. It was decided that in order to explore further and in more detail the potential of cooperation in these fields, a meeting of the Permanent Secretaries of the Foreign Ministries of the three parties will take place in the near future.