GRNews
GreekReporter.comAustralia"To Booko": The Greek-Australian Dictionary of the Greekish Dialect

“To Booko”: The Greek-Australian Dictionary of the Greekish Dialect 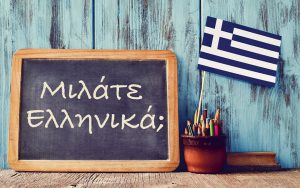 If you know the difference between chopia (lamb chops) and bootey (a car boot), then chances are you are a hybrid Greek speaker in Australia. As a member of a minority, you may find that you are privy to a secret lingo which caters to the needs of the Antipodes.

Grammar hard-liners scoff, condemning this pidgin language as “lazy” or just plain “incorrect.” Those who grew up with it, understand the importance of the Interactive Greeklish Project (tobooko.com), an open research study which records Australian, North American and South African “Greeklish” in one enormous database.

The effort to gather together all the eccentric words of an in-between language in one huge urban dictionary was launched in 2010 by Greek-Australian radio presenter Kyriakos Gold. He wanted to ensure that classic Greeklish phrases such as “Shurup william!” (Shut up, will ya!) would be immortalized for the sake of posterity.

Greeklish was born as newcomers, who were more fluent in Greek, groped for words to communicate with their children who were proficient in English. In a cheeky collusion, they found a way to bridge the gap between languages and generations.

Greek-Australians and others around the global diaspora were known to greet each other with a bevy of phrases, including “Goomorni” (Good morning), “Alo dali mou,” (Hello, my darling), and the always-popular “Havayiou?” (How are you?).

They call their local “roofiano” (roof-repairer) to fix their “roofies” (roofs). They may go to work by “carro” (car) or catch a “bassi” (bus). Like most people they go about their business, doing their laundry in their wassemassini (washing machine).

Sticklers for grammatical rules frown on Greeklish because they see it as a cannibalizing of the languages. But on a sociolinguistic level it is fascinating, because it is evolving, showing that language is a living and developing entity.