Rio Olympics: Greek-American Helen Maroulis Gets Gold in Wrestling for the USA 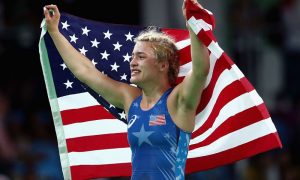 Greek-American freestyle wrestler Helen Maroulis, aged 25, pinned down Japan’s Saori Yoshida scoring a gold medal in women’s wrestling in the 53 kg division for the United States. Her win dashed Yoshida’s hopes to become the second wrestler ever to win four gold medals, just a day after her teammate Kaori Icho became the first.

Maroulis was on a roll and nothing could stop her in the Rio Olympics and made her way to the finals after pinning down Swedish wrestler Sofia Mattson in the semis.

A daughter of Greek immigrants, she first started wrestling at the age of 7 when her brother needed someone to practise with. She describes herself as “Greek by birth. Wrestler by heart. Passionate about life. 3-time World Team member. 2016 Olympic Hopeful.”