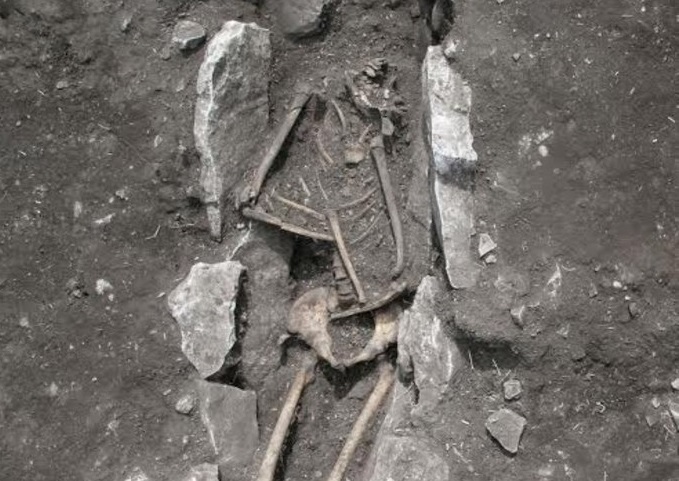 New and significant findings came to light during this year’s excavations at the temple of Zeus in Mount Lykaion, in the southwestern part of Arcadia, noted the Greek Ministry of Culture in an official announcement. According to a local legend the ancient Greek king of gods was born and brought up in the area, which has a panoramic view of the Peloponnese. The south mountain peak stands at 1,400 meters and it used to be a place for animal sacrifice to Zeus. The animal sacrifices in honor of Zeus, mainly goats and sheep, indicate continuous cult activity at the temple, between 16th century BC and the Hellenistic period.
In the summer of 2016 archaeologists uncovered the first human burial. The skeleton, was preserved in excellent condition and was found in a narrow trench. Only the skull of the deceased was missing, however his lower jaw has been preserved.
The length of the tomb reached 1.52m. According to the preliminary study, the skeleton belonged to a person, probably an adolescent male, while the ceramics found in the burial site are dated mainly at the end of the Mycenaean period, suggesting that the burial took place around the 11th century BC
There have been several mentions of human sacrifices at the Mount Lykaion temple in ancient texts, but until now no human remains had been located in the area.
Excavations at the temple will continue until 2020. The Mount Lykaion project is a Greek-American cooperation under the auspices of the Greek Ministry of Culture and the American School of Classical Studies.