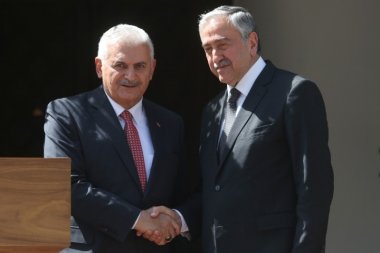 Turkish Prime Minister Binali Yildirim issued a warning to Cyprus regarding UN-led reunification talks. He demanded that Greek Cypriots be more constructive regarding a solution following the Turkish invasion of their island. His comments reaffirm Turkey’s support for the Turkish Cypriot part of the island where 30,000 Turkish troops are stationed and where tens of thousands of Turks were shipped in to occupy the houses of Greek Cypriots.
The statements made on Tuesday were the first since the attempted military coup in Turkey on Friday, July 15. Both the Greek and Turkish sides of Cyprus are concerned that the coup could affect chances for the island’s reunifications that diplomats hope will come soon as they believe that now is the best chance in generations for finding a resolution.
At a joint news conference with Turkish Cypriot leader Huseyin Ozgurgin, Yildirim said that “peace negotiations are continuing” and added that the “Turkish-Cypriot side has with full sincerity, acted constructively.” He warned that the new round of talks are the “last chance for the Greek Cypriot side, which has always acted as the game spoiler” for not accepting the Turkish invasion and eviction from their homes.
Adding salt to the wound, Yildirim recommended that Greek Cypriots use their “last chance” wisely as the status quo could not be sustained indefinitely.
Governments around the world do not recognize the self-proclaimed Turkish Republic of Northern Cyprus. Organizations such as the European Union have recognized the Greek Cypriot government as the sole legal authority for the whole island. The talks usually flounder when discussion on borders is brought up as well as the property rights of thousands of people displaced after their homes were snatched by tens of thousands of mainland Turks systematically brought to populate northern Cyprus after the invasion.