GRNews
GreekReporter.comGreeceLegal Puzzle Over Extradition of the "8" Coup Fugitives to Turkey -... 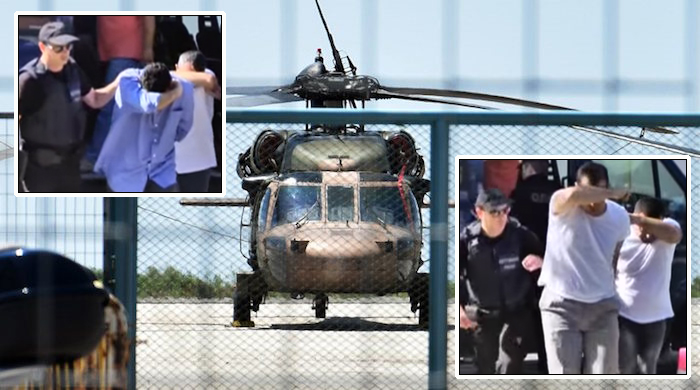 Greek government spokesperson Olga Gerovasili said that the helicopter had entered Greek airspace on Saturday morning asking for permission for an emergency landing. They landed at Alexandroupolis airport at 11:50 (local time) on Saturday, and as they were arrested they claimed political asylum. Gerovasili said that the demand for political asylum would be examined according to the procedures of international law. She added that serious consideration would be given to the fact that the military men are accused in their country of violating the constitutional law and trying to overthrow democracy. The Greek General Staff issued a statement confirming that the asylum request will be examined.

If returned to Turkey, the eight men would face the death penalty that puts their life in danger and validates their claim for political asylum. On Saturday night, Turkey’s hardlined President Recep Tayyip Erdogan fueled hatred in a message to supporters via a video-call with a private broadcaster, prompting thousands to wrest back state control. The bloody aftermath of the failed coup resulted in 265 dead, thousands injured and 3,000 arrests.
Turkish Prime Minister Binali Yildirim suggested changing the constitution so that the instigators of the failed coup can be executed.
Athens is in a legal, diplomatic – even moral – quandary regarding what to do. On the one hand, Greece needs to follow the rules of justice as stipulated in the Treaty of Geneva, so as to not end up facing a conviction over the matter at the European Court of Justice. On the other, it needs to maintain neighborly relations with Turkey and find a golden medium.
Greek military lawyer Lia Marinaki says that the coup supporters are being accused of “illegal entry” and “damaging the friendly relations between Greece and Turkey”.
There are conflicting reports as to how long the judicial process will take before the men’s extradition to Turkey. Some reports point to eight days. If there is an appeal to the decision, then it could run a further eight days. Marinaki told Anadolu Agency that the process “could take a year.” It is in Greece’s interest, however, to work through the procedures as rapidly as possible.

On Sunday, the group of eight Turkish military officials headed to Alexandroupolis to meet with the Greek prosecutor. Sources say that the case for illegal entry and disruption of neighborly relations between Greece and Turkey will begin on Monday, however the official claim for political asylum will be submitted to the relevant authority in South Chili, Alexandroupolis. Greek authorities also need to decide if the men will continue to be in custody while their legal case remains pending.

The Greek police have identified the ranking of the Turkish military officials as two majors, four captains and two first-class sergeants, however Turkish sources initially said that they were two majors, a captain and five privates. Turkish Foreign Minister Mevlut Cavusoglu later said that a colonel was the highest-ranking officer of the eight. The eight Turkish  Army officials are believed to have fled Turkey hours after the attempted coup took place.

Cavusoglu said on Twitter that Turkey has asked Greece to return the eight soldiers who fled. Specifically, he wrote that he spoke on the phone with Greek Foreign Minister Nikos Kotzias who said that the “traitors who fled to Greece will be returned to Turkey as soon as possible.”
Speaking to reporters after a special session of Turkish Parliament, Cavusoglu mentioned telephone contact with Kotzias. “They will expedite the extradition process,” he said, refering to Greece. “God willing, we will bring those traitors to Turkey and surrender them to justice.” During the telephone call, Kotzias repeated Athens’ condemnation of the attempted coup and stressed that the Greek government will follow the procedures deemed by international law.
Yildirim said on Saturday that any country that stands by the Muslim cleric Fethullah Gulen, living in self-imposed exile in the United states for years, will not be a friend of Turkey and will be considered at war with the country.