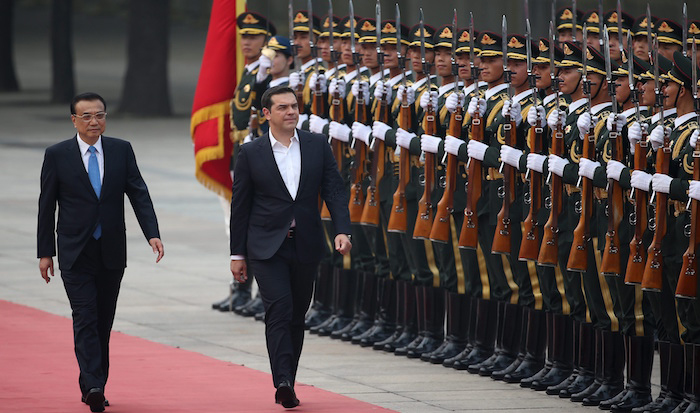 Greek Prime Minister Alexis Tsipras‘ official visit in China started on Monday with the welcoming ceremony in front of the People’s Congress, at Tien An Men Square in Beijing.
Earlier on Monday, Tsipras met with the President of the People’s Congress, Zhang Dejiang.
During their meeting, the Greek prime minister stressed the strategic importance of the Greek-Chinese relationship adding that this relationship is based on the economic cooperation on the one hand and the cooperation in culture and education on the other.
Tsipras underlined that his visit to China coincides with Greece’s exit from the crisis and added that it aims to constitute a pole of stability, growth and promotion of cultural values and humanism. Greece’s relations with China are developing on a mutually beneficial basis.
China has the strategic goal of a policy of “one zone, one way,” and Greece aims the development in all sectors.
China has set a strategic goal of the revitalization and Greece aims at its national renaissance by 2021, Tsipras said. On his part, the president of the People’s Congress underlined that China is the cradle of the eastern and Greece is the cradle of the western civilization.
Dejiang expressed his pleasure that Greece received a positive programme review and added that he would suggest a meeting between the presidents of the two parliaments
(source: ana-mpa)