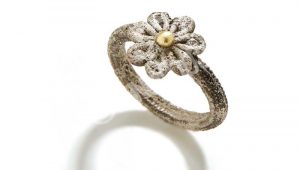 An exhibition on the history of jewelry in the Cyclades islands, appropriately entitled Vanity, is to open its doors at the Mykonos Archaeological Museum this August, creating yet another reason to visit the cosmopolitan Greek island.
More than just an archaeological exhibition, it will display jewelry dating from the neolithic era right up to the present day, with 12 pieces by modern Greek jewelers custom-made for the occasion, as well as two murals and a post-Byzantine icon.
Among those contributing their work, which will be on display in Mykonos for a year before touring the rest of the Cyclades islands and Athens, are internationally acclaimed designers Lito Karakostanoglou, Nikos Koulis, Ileana Makri, Ioanna Souflia and Minas.
“We chose the title because… vanity is the most fundamental parameter of the exhibits. We also wanted a snappy and easily understood title with references to the present, through which the visitor perceives something familiar,” said curator Dimitris Athanasoulis, talking to the ANA-MPA.
“Pieces of jewelry are objects that not only show vanity but are often also magical, have the qualities of a talisman, hide many meanings and make multiple statements,” he added.(Source: ANA-MPA)