GRNews
GreekReporter.comGreek NewsLucky, an Abused Turtle, to be Sent From Lebanon to Greece for...

Lucky, an Abused Turtle, to be Sent From Lebanon to Greece for Treatment 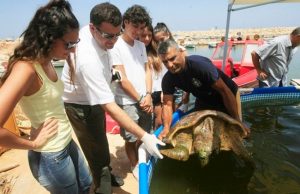 A sea turtle that was abused on a Lebanon beach on June 14 is miraculously recovering and will be sent to Greece for further treatment when he is able to withstand travel.

The Loggerhead sea turtle (caretta caretta) is an endangered species as their population declines due to pollution, shrimp trawling, and development in their nesting areas, among other factors. The turtles have been on the threatened species list since 1978.

The sea turtle, since named Lucky, has just regained her ability to swim again after having been beaten over the head.

Stories around the tragic abuse involve eye-witnesses who claim that Lucky came to the shores of the Chouf coastal town of Rmeileh in Lebanon after someone allegedly dragged her from the water while a child stood on her back and a crowd of people took selfies. Witnesses say that she was then beaten with a stick-like object.

“We are working with the Ministry [of Agriculture] to help this turtle. We are giving it antibiotics, we do not know if it was hit here or when it got to the shore. We can’t make assumptions as to what happened exactly, but [we know] a turtle was hit on its head,” Farah Mehtar, office manager at Animals Lebanon told Reuters.

Pictures of the abused turtle on social media created a frantic effort by animal organizations and the Agricultural Ministry to rescue and try to save Lucky’s life, who is over 100-years-old.

Reuters reported that Mohammad Sukkarieh, a veterinarian from the Agriculture Ministry, explained the conditions of Lucky after the abuse.

“He was in a very difficult health situation and would not even eat…it got some intensive care, received injections every 72 hours and is recovering now,” Sukkarieh said.

Lucky is in need of an X-ray but doctors say he will need one to three months before he is able to travel to such facilities.

The Agricultural Ministry in Lebanon received an offer from a turtle conservatory in Greece to pay for all of his medical expenses and to undertake further treatments at their facilities in Greece.