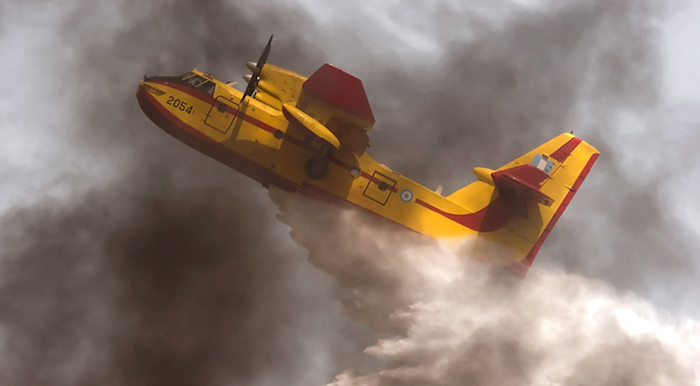 A firefighting Canadair CL-215 fell while on duty, 1km north of the Titan cement factory on the border between the region of Attica and Viotia, central Greece. The pilots had to conduct an emergency landing on Sunday morning while on a mission to put out a huge forest fire at Dervenohoria, a region located at the foot of Mt. Parnitha, according to reports the fire started at 22:40 on Saturday.
The pilots are safe following an emergency landing before abandoning the aircraft as the jet did not have an automatic ejection system for the crew. Sources point to light injuries on the arm of one of the pilots. Both pilots were taken to hospital immediately after the incident.
A total of 115 firefighters with 56 trucks and 38 members of the fire brigade on foot rushed to Dervenohoria after the region was swallowed by flames. On Sunday morning, an additional eight jets and five helicopters joined in firefighting efforts.

Greece recorded 1,784 coronavirus cases Thursday, out of the 50,247 Covid tests that were conducted in the country during the day.
Greece

Giorgos Hatziparaskos, an 86-year-old baker from Crete, is one of the last people who creates the iconic Greek phyllo dough by hand.
Food