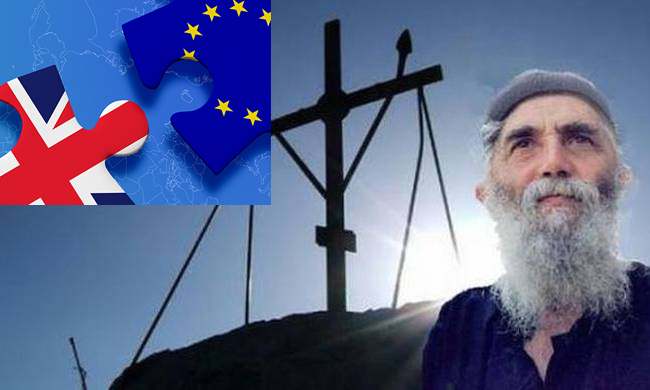 Elder Paisios, a Greek saint that is the Nostradamus of Greece, was canonized last year. The well-known monk of Mount Athos was considered a sage ascetic and was sought after for advice by many believers.
Twenty years ago, he had prophecies that the destruction of the European Union would start in the UK. “It won’t last for many years,” he said. “It would be destroyed by the Brits and Americans, because they are one nation and work together. They say, what’s going on here? Is Hitler rearing his head again? And that’s how they’ll dissolve it.”
His prophecies are dragged from the woodwork every time world events occur. Just last year, another of his prophecies concerning a war between Russia and Turkey was revived following Turkey’s downing of a fighter jet. Paisios had said that Constantinople would become Greek again and that Armenians would also get their property returned.
When Saint Paisios reposed on July 12, 1994, his only will was to have lived for a few more years to see his country expand. “Turkey will be dissected,” he wrote. “This will be to our benefit as a nation. This way our villages will be liberated, our enslaved homelands. Constantinople will be liberated, will become Greek again.”
He had prophesied that tough times would come, but that God would help bring the interests of greater powers in alignment with Greek interests, “not because of justice or friendship but because it would be to their benefit.”
The saint was born Arsenios Eznepidis in Farasa, Cappadocia, in 1924. His family moved to Konitsa, Epirus, following the population exchange and he grew up to be a carpenter and served as a radio operator during the Greek civil war. As a monk, he became famous for his spiritual teachings.