GRNews
GreekReporter.comGreeceA Mirror to the Past: Greek Evacuees from WW2 Fled for the...

A Mirror to the Past: Greek Evacuees from WW2 Fled for the Middle East, Africa 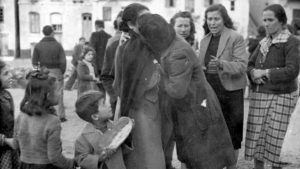 During WW2 as the German and Italian troops occupied Greece, tens of thousands of Greeks chose to flee their homeland in search of refugee camps in the Middle East.
Conditions for the Greeks who made the difficult decision to sell all of their belongings and flee were dire as the Nazis occupied Greece, and hit particularly hard were the villages on islands, where people were literally starving.
Back then, the Greeks fled by sea to Syria and Africa, and recent times where refugees are seeking asylum in Greece have caused a familiar scene for the few survivors of those who fled during WW2.
The reversal of events, with more than one million migrants attempting out of desperation to reach the shores of Greece from Africa and Syria in the past year has stirred up memories for survivor Eleni Karavelatzi who lives on the Greek island, Kastelorizo, which is about 2 kilometers from the Turkish coast.
In 1942 Eleni and her family fled the Nazi occupied Kastelorizo and stayed in a refugee camp in Gaza known as El Nuseirat, she recently told BBC Arabic.
She recanted that after the war had come to an end that tragedy continued to plague the group of displaced Greeks as they attempted to return to Greece in September of 1945, on a British vessel, the SS Empire Patrol. The vessel left the Egyptian city of Port Said carrying Eleni’s family and nearly 500 other Greek refugees before catching on fire a few hours later, killing 33 passengers, including 14 children.
Eleni added that after WW2 the Greek evacuees who made it back home were fortunate enough to have life return to normal. Whether or not this will happen for the millions of refugees now seeking asylum in Greece and the EU remains to be seen.
Many of the other Greek refugees fled the Nazi occupation to Syria and were mainly from the island of Chios, located only a few kilometers off the Turkish coast.
Marianthi Andreadi told BBC Arabic that the memories from the Nazi occupation haunts her until this day.
“I was surrounded by older women. And there was this moment that stays with me when we were on the Turkish border and the guard yells ‘Gel Burda! Gel Burda!’ (come here)..We ran away quickly. I fell down. And eventually he let us go. But I never forgot this.”
Marianthi and others like her remember what it felt like to be desperate enough to flee your homeland to save yourself and your family.
“The Germans were here and we were hungry. I was three back then,” remembers Marianthi Andreadi. “So we left for Turkey illegally and from there we took the train to Al Nayrab camp in Aleppo (Syria).”
From their balconies, the Greeks who were once refugees themselves now sit and watch helplessly as a constant stream of Syrian refugees come off over-packed makeshift fishing boats and seek shelter on the Greek islands.
“It’s like a mirror to the past,” Maria Chroni, one of the Greek evacuees, told BBC Arabic.