GRNews
GreekReporter.comEuropeHagia Sophia to Turn to Mosque During Muslim Ramadan

Hagia Sophia to Turn to Mosque During Muslim Ramadan [video] 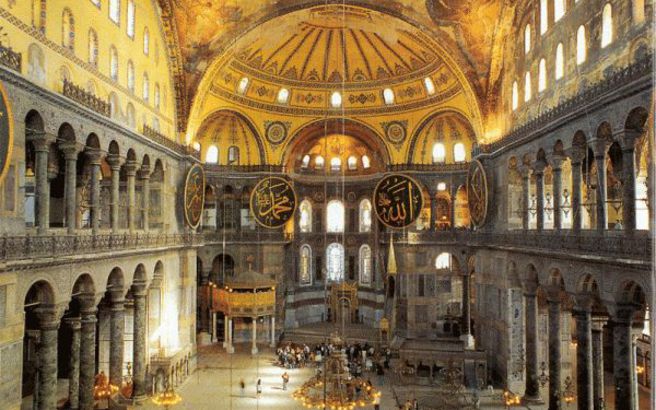 The morning prayer from the Koran was read at Hagia Sophia in Istanbul on the first day of Muslim Ramadan, Monday, June 6, in the presence of Turkey’s general secretary of religious affairs.

The former Byzantine church that now serves as a museum, will turn into a mosque for the next 30 days and the Koran will be read daily until July 5, when Ramadan ends. Religious state channel TRT Diyanet will be broadcasting daily at 2:00 pm from Hagia Sophia.

The fact that the former Christian Orthodox Church that for the past 80 years has operated as a museum and now turns into a mosque for one month has touched a sensitive nerve with Christian Greeks and has been criticized broadly.

However, no official complaint was voiced from the Greek government. The lack of official reaction has prompted criticism from conservative opposition party New Democracy.

“The decision of Turkish authorities to schedule the Koran reading in Hagia Sophia for the next month, has virtually transformed it into a mosque for the first time in 80 years. It is a provocative and incomprehensible act and shows disrespect against Orthodox Christians across the world and is not in line with Turkey’s European course,” said in a joint statement the coordinator of Foreign Affairs and Defence of New Democracy, Dora Bakoyannis, and head of the party’s Foreign sector Ioannis Kefalogiannis.

The conservative party MPs also call on the foreign ministry to take appropriate action immediately and criticize the ministry for its lukewarm, defeatist policy of not displeasing anyone and being good to everyone.