GRNews
GreekReporter.comGreeceRestrictions Placed on How Much Food Permitted to Enter Greece with Travelers... 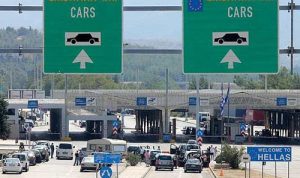 Usually summer tourists from FYROM and Serbia cross the FYROM-Greece border with trunk loads of food in order to save money during their Grecian holidays. This summer will be different for these scores of visitors who typically pack away coolers filled with drinking water, bread, cheeses, meats, alcohol and boxes of cigarettes as the enforcement of a pre-existing EU law regarding food is now being activated in Greece.
The EU law has been active in EU member states for quite some time, but Greece was previously tolerant of letting tourists enter with food stocks. Now, as the financial crisis in Greece continues after years of austerity, Greek authorities have reported that tourists should be aware that any product manufactured outside the 28-nation block, and which has not been preserved in vacuum, will be legally confiscated by border control in Greece and destroyed.
What the implementation of this law means for tourists entering Greece at the FYROM border is that they will no longer be allowed to enter with meat, milk and dairy products. Also, tourists will be allowed only 40 cigarettes, or 50 grams of tobacco. The amount of beverages are also being limited as now only one bottle containing more than 22% of alcohol, or two liters of a beverage that has less than 22% of alcohol is permitted. Other alcoholic beverages such as beer and wine are capped at 12 and 4 liters, respectively.
Commonly used products such as baby food and pet food are also being scrutinized, as two kilos of each are allowed to enter Greece’s territory. As with other EU countries, Greece will now enforce laws that ensure travelers entering the country with more than €10,000 in cash report their funds to the customs officers.