PM Tsipras: Greece Coming Out of a Double Crisis Unscathed 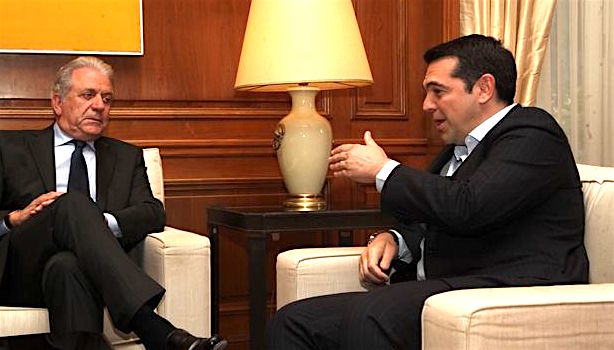 Greece is coming out of a double crisis unscathed and begins efforts to help the weakest members of society, Greek Prime Minister Alexis Tsipras said on Wednesday in a meeting with EU’s migration commissioner, Dimitris Avramopulos in Athens.
“Through the core of two simultaneous crises, the economic and the refugee crisis, which was unprecedented for our country, we come out unscathed, standing on our feet and now the long and difficult fight begins to heal the wounds that our weakest fellow citizens have endured,” Tsipras said.
Commenting on the Eurogroup meeting, he said Greece waited four years to have a decision that will introduce a specific road map and commitments for debt relief. “It proves that the notion of solidarity on the side of our partners is a feasible notion and not a wish,” he told the Commissioner. “The most important aspect is that stability is fully restored and all the debate on whether Greece can remain in the strong core of Europe ends,” he added.
Discussing the ongoing evacuation of Idomeni’s refugee camp, Tsipras said it is being done without any violence and the railway line is also cleared. He said Idomeni was “a wound in the management of the refugee crisis which admittedly is a successful management, largely due to the big success of the agreement between the EU and Turkey.”
On his side, Avramopoulos said that what is taking place in Idomeni offers a strong message to Europe that “with humanity and sensitivity, these people can enjoy hospitality and support, erasing a picture that, as was said in the past, was a disgrace for Europe, for the civilized world.”
(source: ana-mpa)