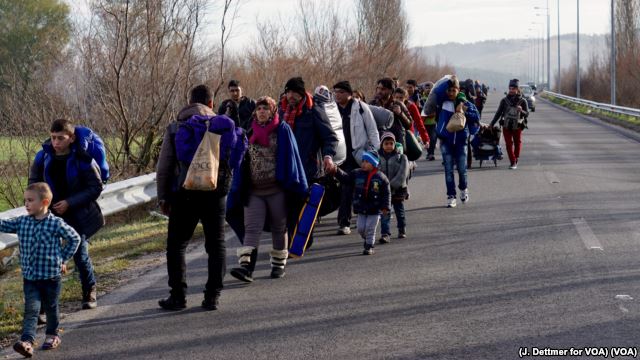 Within a matter of hours of Turkey’s new government being announced, a major dispute over visas erupted Wednesday between Ankara and the European Union, threatening one of the main foreign policy achievements of ousted prime minister Ahmet Davutoglu.

Turkish President Recep Tayyip Erdogan is accusing Brussels of double standards and warned he is ready to freeze a key migrant readmission agreement with the European Union.

Turkey has committed itself to accepting back all migrants that enter neighboring Greece illegally, in exchange for billions of euros in aid and visa-free travel for its citizens to much of Europe. The deal was crafted by Davutoglu, who was recently ousted by Erdogan.

“The whole point of getting rid of Davutoglu and appointing a new one (prime minister) is that policy would entirely be made in Erdogan’s palace. I do not think, for instance, the foreign minister will even be able to tell you what Turkish foreign policy vis-a-vis towards the EU is or will be. He will have to consult Erdogan or his advisors,” Yesilada said.

The latest dispute centers on the EU’s insistence that Turkey narrow its definition of terrorism in its anti-terror law, as one of 72 criteria it needs to comply with to gain visa-free travel for its citizens.

Erdogan has made little secret of his distrust of Europe, a stance observers say is empty rhetoric that plays well with Turkish nationalists he is courting before an expected referendum to boost his presidential powers.

Carnegie Europe visiting scholar Sinan Ulgen says that perception may be a mistake, with the country battling Kurdish rebels and Islamic State militants.

“The Turkish president has stated clearly he has no intention to change [Turkey’s] anti-terror legislation at a time when it is under an acute threat of terrorism. And therefore we have now reached a situation of stalemate. And if neither party budges, then it’s unclear how this deal will be implemented successfully, so right now it’s really under jeopardy,” Ulgen said.

Since the deal was struck, the numbers of migrants entering Greece from Turkey have dramatically fallen from thousands a day to single digits.

Political columnist Kadri Gursel of Turkey’s Cumhuriyet newspaper and Al-Monitor website warns the migrant deal could be all that is holding EU Turkish relations together.

“Erdogan is becoming a figure in the perceptions of the Western public opinions comparable to any Middle Eastern dictator. So it will be very easy to break up, with this Turkey run by such a leader. But breaking up with Turkey will have unpredictable bitter consequences on Europe’s security and stability, especially in the first place the Balkans region, and this is a very, very difficult dilemma.”

Ankara has invested millions of dollars across the Balkans courting Muslim minorities. The state-backed programs are part of Erdogan’s vision of projecting Turkey’s influence beyond its traditional allies.

It’s a point underlined by Turkey’s new EU affairs minister, Omer Celik, a close ally of Erdogan, who warned Wednesday the European Union is not Turkey’s only option.
(source: VOA)