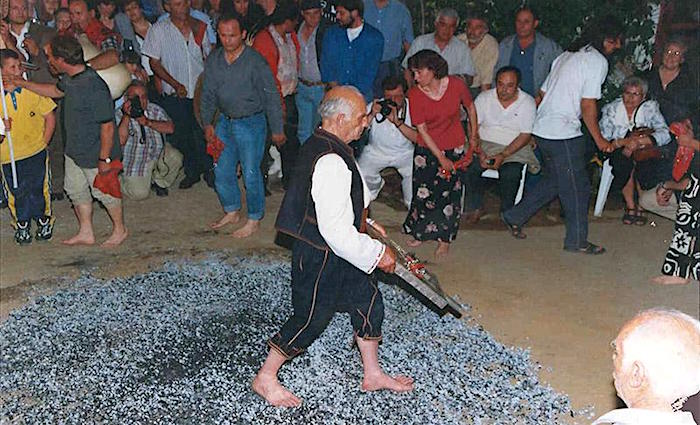 This weekend from May 21 through May 23 the unusual ancient folklore and legend of fire-walking lives on in Greece. Dating back to Pagan times, Anastenaria is a traditional ritual of fire-walking celebrated in a few places in Northern Greece and in southern Bulgaria, where Greek descendants from Thrace settled in 1923. Every year the Bulgarian and Greek villages if Aghia Eleni near Serres, Langada near Thessaloniki, Kerkini near Serres, some villages on the coast of Evros River and a singular small village near the city of Drama perform this unique annual ritual in celebration with the name days of Saint Constantine and Saint Helen.
Along with the fire-walking ritual, the 3-day festival has various processions, music, dancing and an animal sacrifice. On the eve of the feasts of Saints Constantine and Helen, while trancelike rhythms of beating drums sound in the background, the Anastenarides take part in dances during which they believe that they are “seized” by the saints, and enter a state of trance. During this trance, they carry the icons of saints Constantine and Helen and dance ecstatically for hours before walking barefoot across hot coals that can reach as hot as 535 degrees Celsius.
The roots of this tradition are seeped in mystery and a bit of controversy as well. The Anastenarides say that the origin of the ritual lies in a fire which took place at Kosti, near the Black Sea in the thirteenth century which set ablaze the church of Saint Constantine. As the empty church burned, the villagers claimed to hear cries coming from the flames and believed that they were cries from the icons, calling out for help. Some villagers ran into the burning building to rescue them, and returned with the icons — both the human protectors and icons were not burned nor hurt in any way. This occurrence prompted the annual celebration which the Anastenaria holds to honor their safe delivery.
However, many scholars do not believe this to be the true origin of the Anastenaria rituals. It is largely believed that the ceremony is the survival of an ancient Thracian Dionysian ritual which was later given a superficial Christian interpretation to help receive a better reception from the Greek Orthodox church, which does not support the rituals as they are viewed as pagan. This hasn’t stopped the Anastenarides from celebrating their age old tradition.