GRNews
GreekReporter.comGreeceMeet Greece's Under 40 CEOs Making a Name for Themselves Despite the... 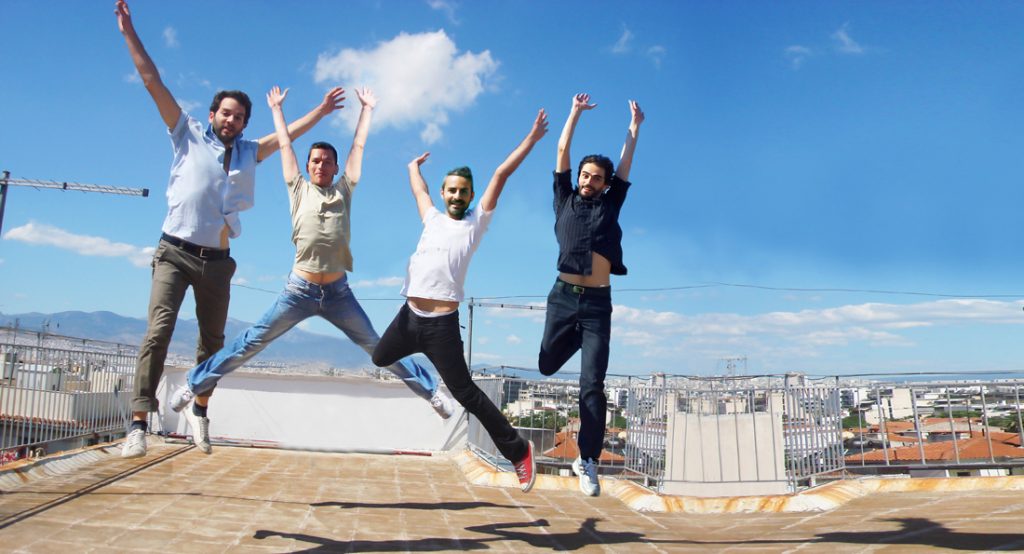 As the Greek government is still in negotiations with the European “institutions,” the continued Syrian civil war and conflicts in the Middle East and Northern Africa continue to send an influx of refugees and migrants to the country, and the IMF as well as other international supporters continue to imply that Greece needs assistance in order to leverage its debt. The news for Greece hasn’t exactly been bright.
Many millennials have found opportunities to seek work and entrepreneurial ventures elsewhere, and according to job market polls, maybe rightly so. At the height of the Greek crisis last year, capital controls saw thousands of Greeks losing their jobs. An estimated 180,000 to 200,000 well-educated Greeks have fled to seek their fortune abroad and the relocation of human capital has had “bleeding” dimensions for Greece. 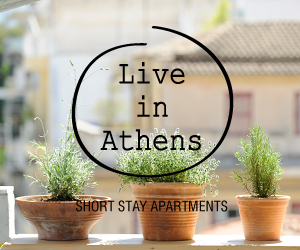 However, there is a bright light in this inopportune time for Hellas.
I got the chance to interview a group of cool under 40 CEOs running Live in Athens. Varnavas, Andreas, Antonis, and Vassilis created a play on the “hotel” concept, really a set of short stay apartments spread throughout the city that provide a peaceful home away from home and easy access to key must-see tourist attractions in the capital so you can live as the locals do!
Vassilis tells me that for the first year in business it was just four friends, best friends that is, doing everything from cleaning the hallways to manning the phones for bookings. It wasn’t easy and in fact the four friends are still very hands on with their business.
What I was curious to find out was why and how they decided to open up a hotel in a market that has forecasted economic instability since as early as 2009. Yes, tourism is one of Greece’s largest industries, but even that is leaning toward the waning side. 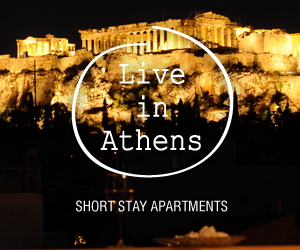 These under 40 CEOs shared an especially important message about sticking it out and making the business work in their homeland, in their city. Explaining how they find it is essential, especially in this economic time, for young Greeks to feel like they can be entrepreneurs right here in Greece. More so, they make the Live in Athens experience unique and cool enough to make it a must stay for your next trip to Athens. 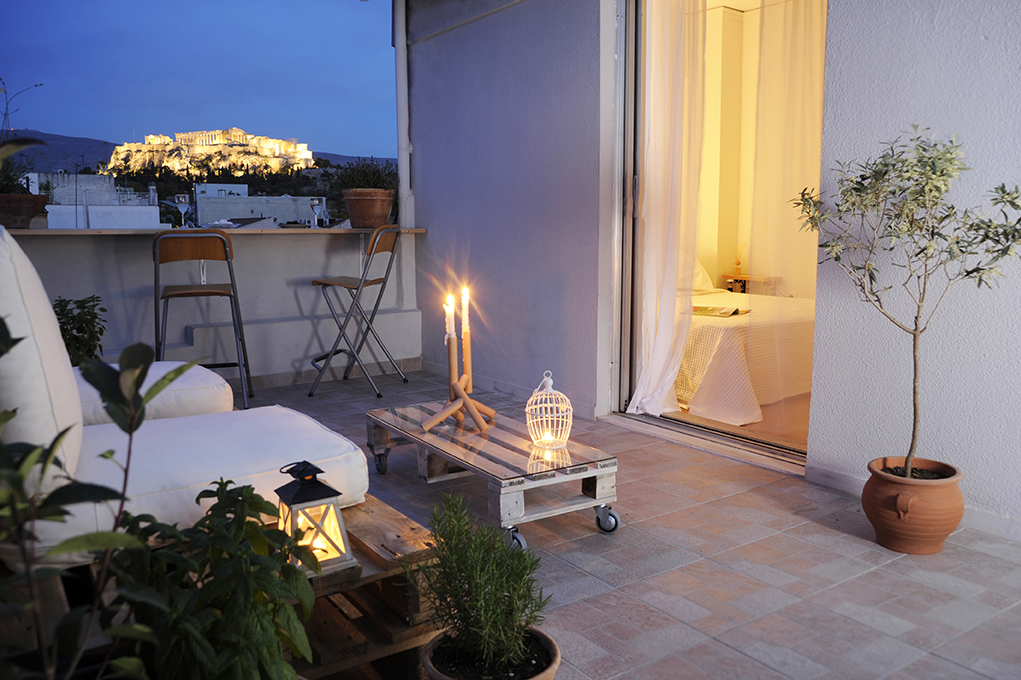 What made all of you want to go into business together as friends?
We have been friends for years and always discussed our dreams and business ideas. This collaboration came out naturally, we never really said “we want to do a business as friends.” It just happened and evolved over the years. When we started, 3 out of 4 were unemployed, so practically we needed to do something for ourselves to get on track.
We started with one apartment in Thissio, then found a second one, and from that point, things moved on their own. We strongly believe that when you have a meaningful vision and work hard, things can happen. Our friendship means we are open and honest with each other and we try to bring out the best out of everyone – us four and all partners and clients. This is an ongoing procedure, we cannot take anything for granted. 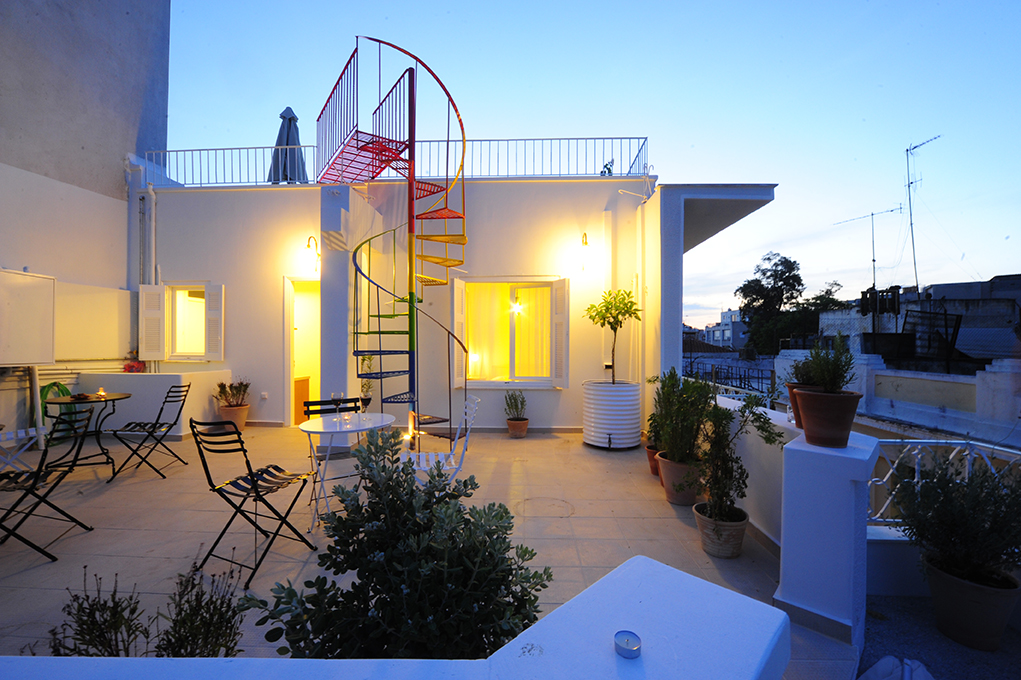 Why Greece, why Athens, and why a hotel, instead of say a bakery for example?
First of all, Live in Athens is not a conventional hotel. At the moment we own 11 apartments, suitable for travelers that want to feel like they are at home in the heart of our city. Our guests are mostly people who want to explore the hidden treasures of Athens. We do not provide only a place to “sleep over.” We provide the opportunity to Live in Athens, the way locals do, even if it is for a few days.
We travel a lot, sometimes all together, and always enjoyed staying in apartments (if there was not a friend to host us), rather than hotels. We always had an interest in tourism and some of us have worked in related projects in the past. We noticed that there was a growing number of people seeking apartments in Athens and there was a gap in the market, while at the same time there is a quest for what we call “quality hospitality.” The point was not to make any kind of business, it was to create something meaningful for the city and its visitors.
Despite the difficulties, we haven’t really thought of moving abroad. We always wanted to stay in Athens. This is our city, the place we know best, we want to live and create here. 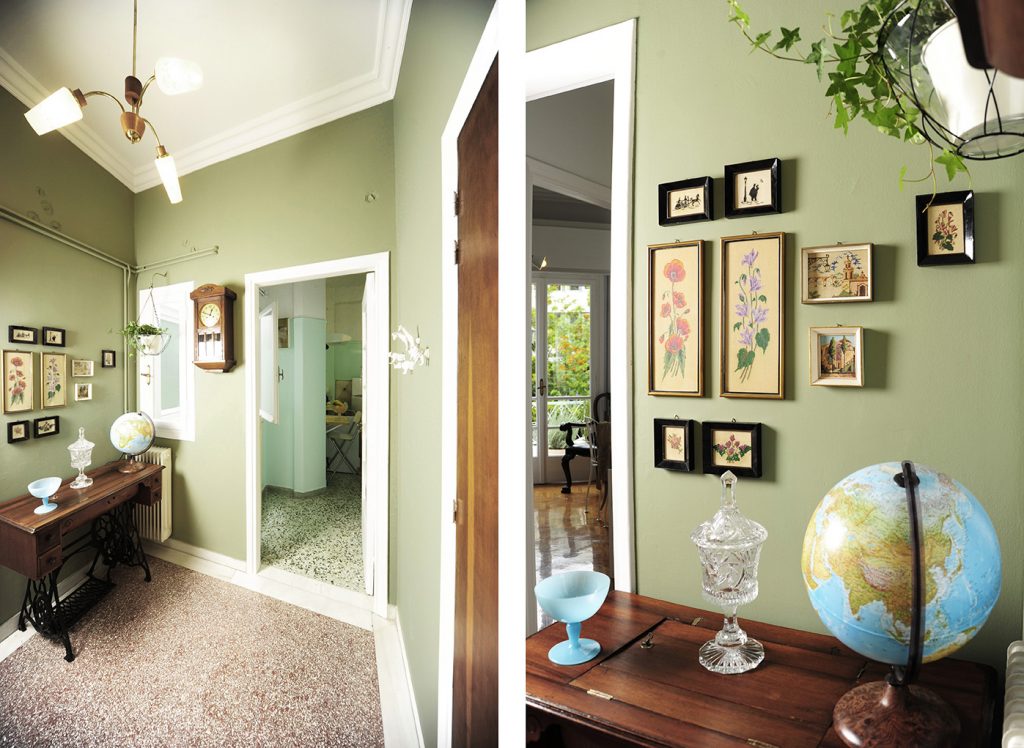 What can you say to young Greek people making their Grexit believing there is no hope for this country?
The “brain drain” trend is a fact and it’s happening for valid reasons. We are not happy with that, many friends have moved abroad, but everyone has the freedom to make choices, change countries, explore opportunities. The crisis is shaping a new social and business culture and new opportunities arise for it within the country as well. We would invite all young Greeks to explore those opportunities, think out of the box and be sure that if they really want to stay in the country, they can make it happen. 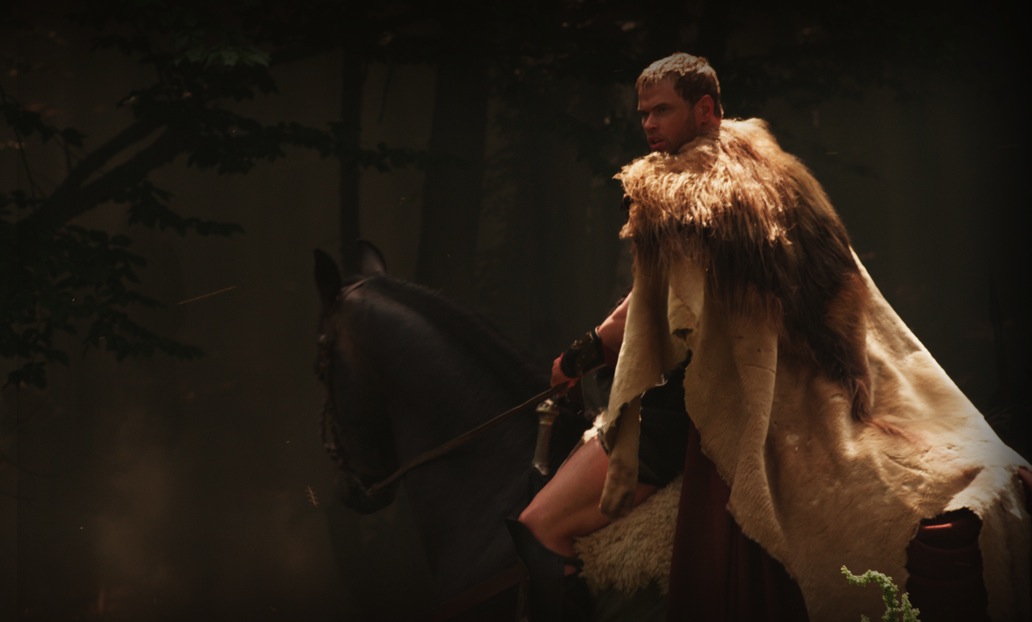 How did all of you meet and become friends?
It’s a small city and its easy to meet like-minded people around Athens. Andreas and Varnavas worked together in a design agency and became friends since then. Varnavas was also friends with Antonis and Andreas with me [Vassilis]. We actually met all together while on a boat to Crete. Travelling was in our DNA from the first moment.
Where are all your hotel apartment locations, and why apartments?
All our apartments are centrally located, nine of them in Psirri and two in Thissio.
As we said before, our guests are mostly travelers that want to explore the most of Athens. Staying in an apartment rather than a hotel, means that for a lower price you get your own feel-like-home space, you can prepare your own food, enjoy your urban terrace and mix with the locals more easily. People don’t rent walls and beds; they have a quest for experiences that add value to their travels. 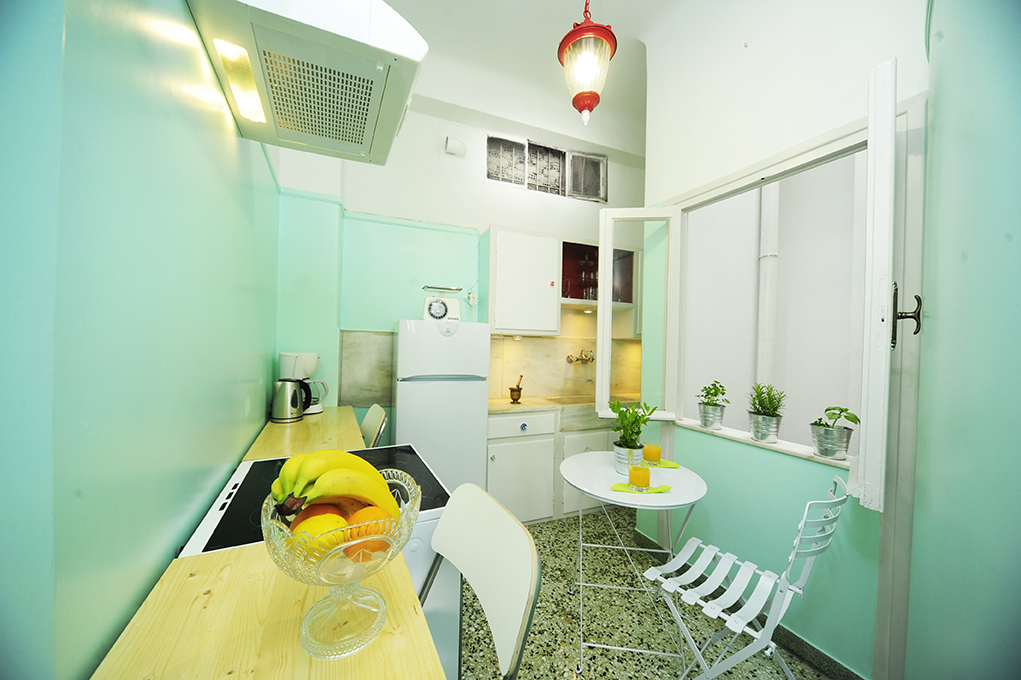 What are some of your favorite things about Athens?
It’s mostly the city’s diversity. The mix of the new with the old. And the feeling that Athens is real, it’s not a perfect looking city and it is certainly going through a transformation period. You can feel this with a walk downtown – from Exarchia to Metaxourgeio, from Psirri to Gazi.
Acropolis will be in view most of the time. Bring it next to a graffiti piece, like the famous figures by street artist Sonke or Alexandros Vasmoulakis’ murals in Psirri, and you get an idea of what kind of diversity we are talking about.
And then there are the fruit markets, the emerging art scene, the great places to eat real food, the fact that you are never sure when nightlife ends, the numerous archaeological sites, the Parnitha mountain or the beach, just a 40 minute drive away.
But most of all it comes down to one thing: the people. Athenians love their city and most of them are willing to help visitors make the most of it. 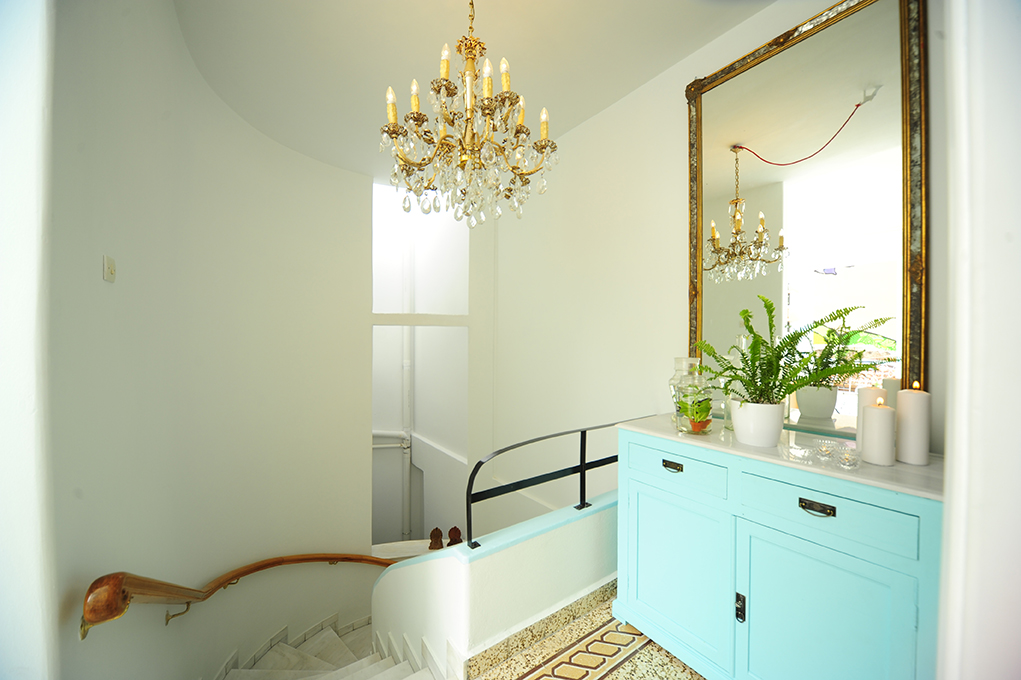 What funds did you use to start the business and what year did you start?
We started working on the Live in Athens idea in September 2011 and our first guest arrived in May 2012. By 2014 we had created 11 apartments. It was not an easy task. Our funds were actually from a small moneybox. What we made in the first years, we invested in the development of our business. From the very start we felt that hard work and support by friends, family and other like-minded Athenians was the key to making the idea grow.
What would you say the business climate is like in Athens?
First words that come to mind are uncertain and difficult. This is not just a business thing, it’s bigger than that, change is mostly social and personal, our version of reality has changed and we are re-valuing things in our everyday life. Today, the business climate in Athens is largely influenced by that and what it has brought: emerging social groups, return to authentic values, connection with the good side of our country, reexamination of our values, need for fair business. 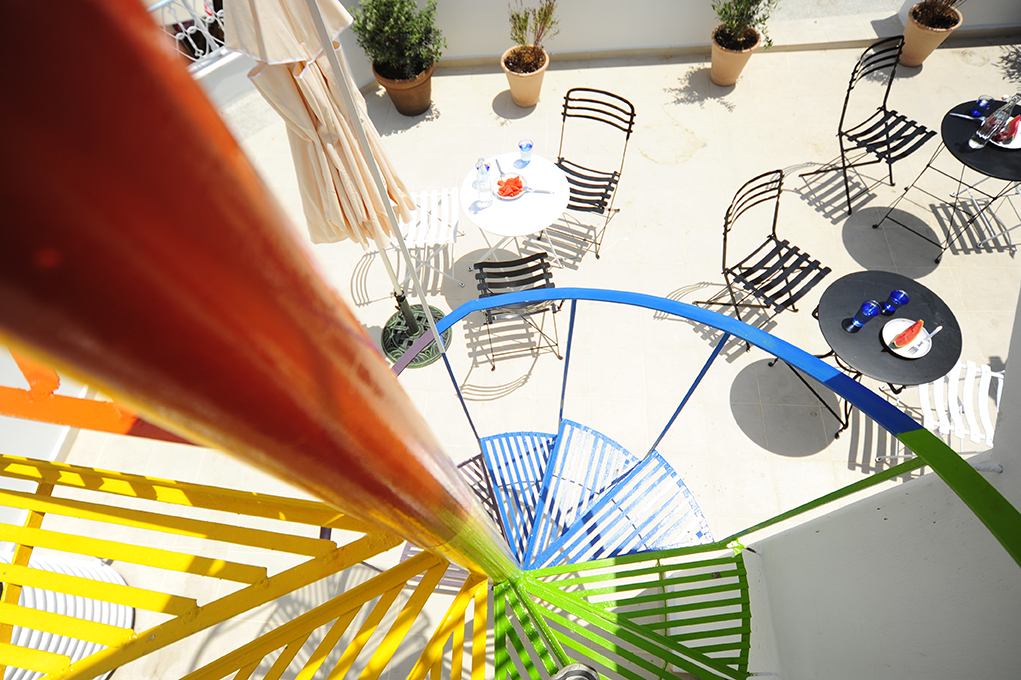 What is your least favorite thing and most favorite thing about the hospitality industry?
Least favorite thing would probably be the old way of thinking, the mentality “let’s make money from tourists easy and fast.” There is a changing perception on that and we think that in the near future only businesses offering value to visitors will survive.
Most favorite thing is certainly meeting people from across the globe. We are amazed by the cultural diversity and how we can learn from each other. However, despite this diversity, it’s really strange how we all share some common values and beliefs. At the end of the day we have much more in common with people from different parts of the world than we think.

Find more information on Live in Athens here. Speak with one of the CEOs directly via phone or email by request. You won’t be disappointed.