GRNews
GreekReporter.comGreek NewsArchaeologyAncient Grave With 80 Bodies Found Near Athens May be Linked to... 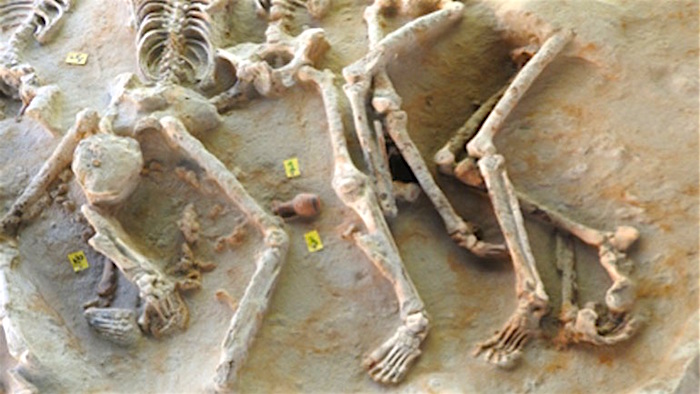 Archaeologists digging in the area of the Faliron Delta, a coastal area in southern Athens, Greece, which served as a port for Athens in classical times, have discovered an ancient mass grave containing 80 bodies, placed side by side, some of whom are shackled, an antiquities curator said.
From the research conducted so far, 50% of the area has been cleaned and the bones recovered appear to be young men, well-built, with excellent dentition, who do not appear to have bone fractures. One skeleton was discovered with an arrowhead stuck in its shoulder which points to a possible capture, archaeologist Stella Chrysoulaki from the Ephorate of Piraeus, Western Attica, and the Islands, said in a presentation at the Central Archaeological Council.
The importance of the findings, which came to light during the past 20 days and were found at a depth of a mere 2.5 meters, is that they can be safely dated, because of the presence of two trefoil jugs discovered nearby, placing them at the third quarter of the 7th century BC. This date may connect the skeletons with the Cylonian affair.
Chrysoulaki said the findings have a huge historical significance and require a close cooperation between the State and the Niarchos Foundation, which is funding the excavation, to best present and conserve the site.
(source: ana-mpa)