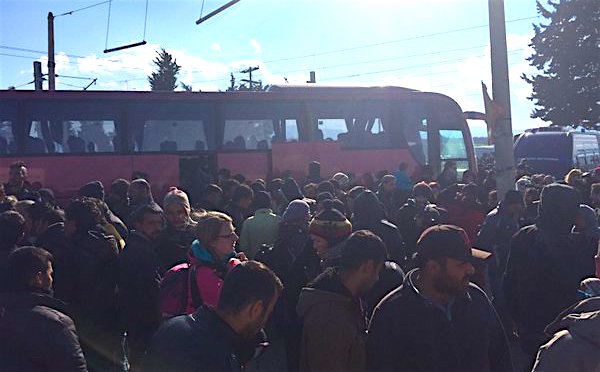 Locals threw pigs’ heads at the gates of a new migrant camp near Veria in northern Greece, protesting the arrival of six buses full of refugees.
On Saturday night, the first six buses carrying refugees and migrants arrived at the army camp Armatolos Kokkinos near the Aghia Varvara village. The camp is to serve as a hospitality center for migrants and refugees. The refugees were transferred from the Former Yugoslav Republic of Macedonia-Greece border in Idomeni. 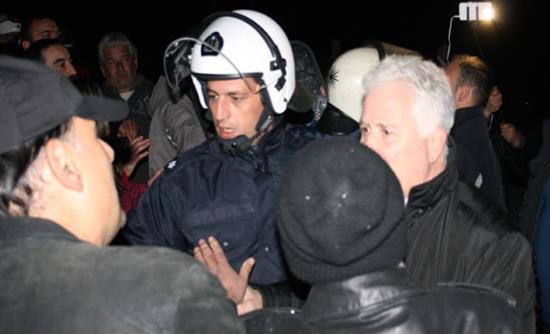 The local residents were gathered before the buses’ arrival to protest against the establishment of the migrant camp in their area. Upon the arrival of refugees, residents taunted them while some threw pigs’ heads at the camp gates.
The protest lasted about 15 minutes before the locals allowed for the buses to enter the refugee center.
Residents also attempted to attack SYRIZA MP Giorgos Oursouzidis who was there to welcome the refugees. The government official tried to speak to the residents who were very hostile and moved threateningly toward him. Oursouzidis ran and took cover inside a police van, while police in riot gear prevented the locals from reaching him. A local threw a pig’s head at the police van generating more uproar.
Refugees start moving away from Idomeni
Bad weather and squalid conditions at the Idomeni tent city are forcing refugees to start moving away from there. Refugees and migrants are being moved to hospitality camps in Imathia and Pieria, northern Greece.
Greek authorities plan to slowly evacuate the neutral zone between Greece and FYROM at the Idomeni crossing point. As of Friday afternoon, hundreds of people agreed to leave the area for comfortable shelters.
The government plan is to move 1,000 people initially, said the spokesperson of the refugee crisis handling comittee, Giorgos Kyritsis. There are about 13,000 people at Idomeni at the moment and the government plans to move them all away as another 30,000 accommodation places are under construction.

Mitsotakis announced on Thursday that he will bring about new legislation to tighten sex abuse laws and help victims, while endorsing the #MeToo movement.
Charity