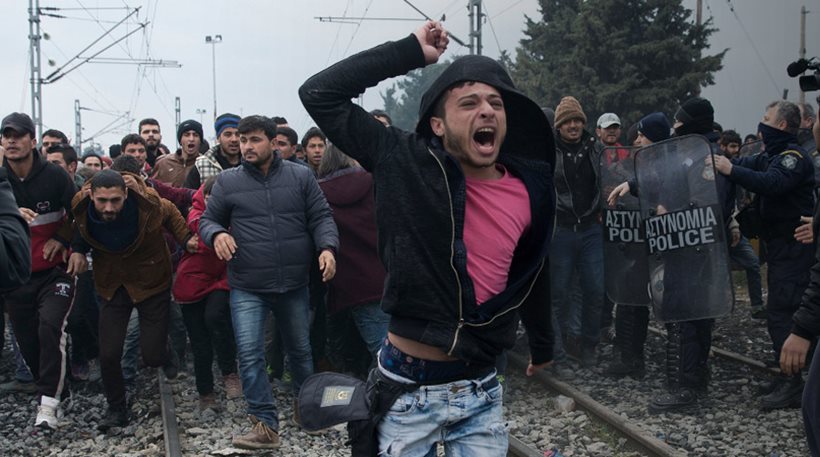 The number of refugees and migrants in Greece had reached 52,207 on Tuesday with more arriving every day from Turkey illegally. As a result there is tension at the Greece-FYROM border and Piraeus Port.
About 14,000 frustrated refugees at Idomeni — on the Greece-Former Yugoslav Republic of Macedonia border crossing point — live under poor conditions, while waiting for the border to open. Despite the insistence of Greek authorities that the border will never open again, refugees refuse to live in area in the hope that the border would open.
On Tuesday, the situation at the Idomeni tent city was explosive. Hundreds of refugees staged a protest demanding the opening of the border with FYROM and blocked road access to and from the camp. Some pelted stones at members of a non government organization who were trying to distribute food. An NGO left the camp saying that the conditions are not safe to do their work.
Refugees tell reporters that the conditions are now intolerable because of complete lack of hygiene and food shortages. Two of them set themselves on fire and were transferred to the hospital in Thessaloniki.
Health Minister Andreas Xanthos visited Idomeni to assess the situation and had discussions with all pertinent organizations. The minister will also visit all migrant hospitality centers in northern Greece.
At Piraeus Port, more than 5,000 refugees and migrants are camping out waiting to be transferred to hospitality centers. The Piraeus Medical Association issued a health hazard warning as the refugees live under squalid conditions.
President of the association Nikos Platanisiotis called on the state to transport the people into organized hospitality centers. He said that as summer is approaching and the heat is rising, health risks are increasing.
Meanwhile, on Lesbos and Chios, refugees protest that the registration centers (hotspots) have turned into closed-end structures after the European Union-Turkey agreement on Friday.
At the same time the United Nations High Commissioner for Refugees expressed in the strongest way the reaction to the content of the EU-Turkey agreement, which it considers illegal.
UNHCR spokeswoman Melissa Fleming announced that UNHCR stopped some activities on the Greek islands because it opposes the new EU-Turkey agreement, namely the conversion of hot spots into closed structures.
However, despite the fact that Turkey agreed to stem the flow of refugees to Greece by blocking people smugglers across its shores, refugees keep arriving on Greek islands on a daily basis. Three days after the EU-Turkey treaty went into effect, and the inflow of migrants remain the same.
Greek authorities search for locations across Greece in order to establish more migrant hospitality centers.