GRNews
GreekReporter.comGreeceChines Artist Puts on a Performance in Idomeni for a Young Aspiring... 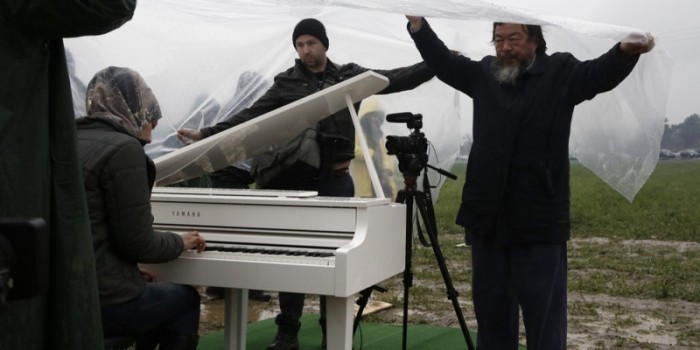 Chinese dissident artist Ai Weiwei, who had announced plans earlier in the year to create a memorial on the Greek island of Lesbos for the plight of refugees, many of whom have lost their lives trying to reach Europe, made another statement in support of refugees, on Saturday.
Ai brought a white grand piano to an Idomeni camp on the Greek-FYROM border and invited an aspiring young Syrian pianist to perform.
The young woman, 24-year-old Nour Alkhzam, who is trying to reach her husband in Germany, played the piano for the first time in three years in the pouring rain while Ai held a plastic sheet over her head.
Ai told reporters that watching 24-year-old Nour Al Khzam play was “very touching”, adding that “it tells the world that art will overcome the war”.
“She has been victimized by these wars. She has not had the chance to touch a piano in three years. She and her husband have been separated for one and a half years” said the artist.
“We want to reveal a new image of them, to relay possibility, art and imagination. This is the image that needs to be relayed to the world.”
Ai Weiwei’s performance was the latest in a series of projects that aim to denounce Europe’s handling of the refugee crisis.
Last month, Ai draped thousands of life jackets discarded by migrants arriving on Greece’s Lesbos island around the columns of Berlin’s Konzerthaus concert hall.
In an interview on Al Jazeera on Thursday, Ai said that Europe’s response to the crisis was stripping refugees of their basic human rights.
“Refugees are not slaves – they have dignity, they are just like you and me. They come from the war, a war caused by many, many politicians for all kinds of reasons. But they are victimized by this war. They come to Europe just for a moment of peace.” he said in the televised report.
Ai’s work has been exhibited around the globe but his works have often faced the wrath of Communist Party authorities in China.
He was detained in 2011 for 81 days over his advocacy of democracy and human rights as well as other criticisms of the government in Beijing.
(Sources: RFI; Telegraph)