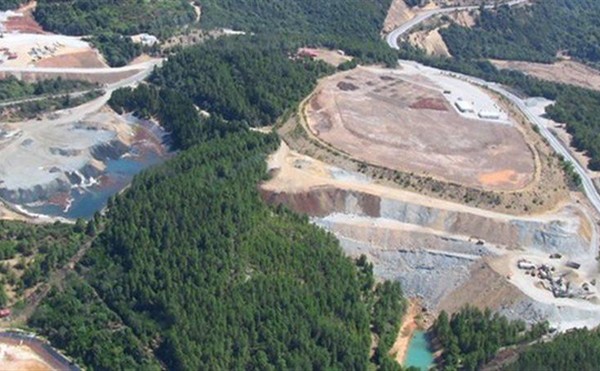 The rift between the two men started in the summer of 2015, when the Greek government denied a license to an Eldorado Gold operation in Skouries, northern Greece, on the grounds of environmental regulation violations.

According to a Bloomberg report, Eldorado shares fell 19 percent to 3.53 dollars on January 12 on the Toronto Stock Exchange, the biggest one-day decline since December 2008, after Wright announced at a press conference in Athens that the company was suspending its investment plans for its Greek mines, blaming the attitude of the government.

“Wright is a CEO, he’s smart and he’s experienced; he gave a press conference knowing that the share price of the company would tumble,” Skourletis said when asked for an update on the country’s talks with Eldorado Gold in a wide-ranging interview. “Why did he do that? In my opinion, and I told him when he was here, he played games with the share price. ‘You have told your friends that you are going to say these things at the press conference so that they could sell beforehand and then buy at lower prices,'” Skourletis said according to Bloomberg. Yet, the Greek minister provided no trading details to back his claim.

The company’s spokeswoman in Vancouver, Krista Muhr, replied on behalf of the CEO, saying Skourletis’ allegations are “utter nonsense.”

Bloomberg says that Wright bought 18,569 shares at 3.83 dollars each on February 8. That brings his total to 1.17 million shares.

Eldorado shares have dropped 39 percent in the past year, the most among 19 competing miners tracked by Bloomberg, as it has gone back and forth with the government to develop its mines in Greece.

“Eldorado’s commitment to Greece has resulted in over 700-million-dollars of investment into the country since 2012,” vice president Eduardo Moura told Bloomberg. “The failure of the ministry on numerous fronts has forced the company to revise our investment plans; however, we remain committed to our Greek projects and the creation of jobs and long-term development for the benefit of all stakeholders.”

However, Skourletis accused Eldorado Gold of trying to get permits without following environmental regulations and “blackmailing” the government by threatening to withdraw from Greece and leave the hundreds of workers they employ jobless. “They are colonialists, not investors,” Skourletis said characteristically.

Eldorado submitted licensing applications to further develop its mine operations in northern Greece in December, the minister said. Authorities are required by law to respond within three months, and they will do so by the end of March, the minister said. If the miner complies with its environmental and planning commitments, then the government won’t stop the project which was licensed by the previous government, as there’s “continuity in state decisions,” Skourletis said according to Bloomberg.

The minister further commented he believes that the company probably wants to halt its investment to Greece anyway. “Eldorado may want to stop the investment in Greece, and they just want to put the blame on the Greek government,” Skourletis said.