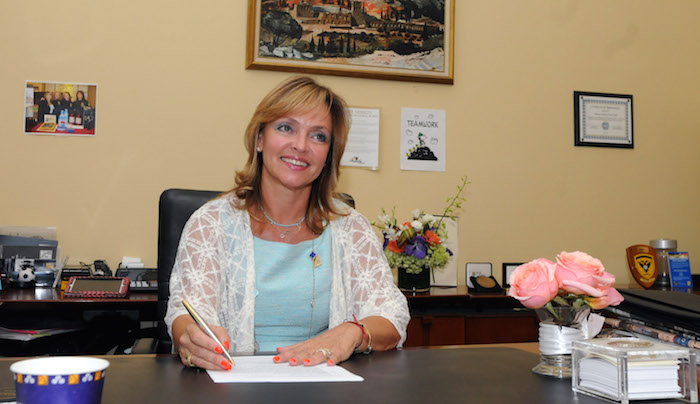 In Celebration of Women’s History Month the Association of Greek American Professional Women (A.G.A.P.W.) will honor Atlantic Bank President Nancy Papaioannou with the “Greek American Woman of the Year” Award during the non-profit organization’s annual gala.

A.G.A.P.W. will also award a tuition scholarship in honor of Papaioannou who is also the President of the Hellenic American Chamber of Commerce.

Papaioannou was born, raised and educated in Athens, Greece, where she attended Arsakion, a prestigious preparatory school, as well as the French Academy. At the age of 18, she joined the National Bank of Greece and in 1990, was transferred to its U.S. affiliate, Atlantic Bank of New York.

Once in New York, Papaioannou continued her academic studies, majoring in accounting and banking, and graduating from Marymount Manhattan College with a degree in business management. Building on her extensive experience and education, she became the manager of the Premier Banking Group of Atlantic Bank of New York in February 2001. In 2006, when Atlantic Bank of New York was acquired by New York Commercial Bank, Papaioannou continued in her leadership role with Premier Banking.

She assumed her position as Atlantic Bank president in 2014.

The event honoring the Greek-American banker is set to take place at the Metropolitan Club in New York on March 8th, will feature Dr. Miranda Kofinas as its keynote speaker, while Ms. Aphrodite Skeadas will be the Master of Ceremonies.

A.G.A.P.W. is a non-profit organization based in New York City and run by women on a volunteer, pro bono basis. The organization is seeking to expand career opportunities and promote community and leadership building among Greek-American professional women by forging collaborations among ourselves and establishing partnerships with other organizations inside and outside the Greek-American community.