GRNews
GreekReporter.comGreeceGreece Under Syriza Begins to Bear a Leery Resemblance to Maduro’s Venezuela 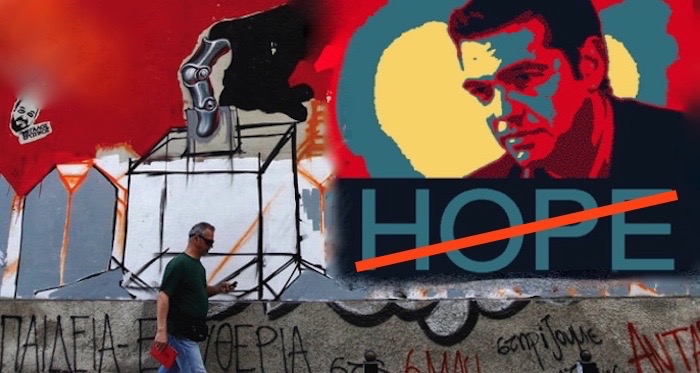 Greece’s ongoing protests by the nation’s farmers, professionals and working class people against the government’s plans for pension reform and raising new tax revenues are having effects across the economy, according to market analysts, thereby adding additional pressures to an already crumbling economy.
Indeed, the current situation in Greece begins to resemble what was happening in Venezuela in 2014-15 under the Maduro regime when a series of protests and political demonstrations paralyzed the economy, leading eventually to a resounding defeat of his socialist party in the December 2015 elections.
Maduro treated the protests in his country as an organized fascist coup, thereby misjudging the anger that his government’s policies and the deeply practiced corruption amongst his ministers and others in government positions was producing among all segments of Venezuelan society.
In Greece, the Syriza-led government also appears to treat the ongoing farmers’ protests, in particular, with a rather nonchalant attitude, viewing them as it does as simply a matter of misinformation on the part of farmers. It appears that the the Greek ministers think that farmers are dumb and uneducated and only the Syriza gang knows what is best for them and the country.
Perhaps this view on the part of the Syriza-led government and its Prime Minister Alexis Tsipras about the real causes behind the ongoing protests are due to the fact that they have yet to paralyze the entire country, making government officials feel that the matter is under control and that the protests will soon dissipate as people will get tired by being constantly out in the streets protesting or demonstrating.
After all, this is a government of people with plenty of experience in organizing protests that never got anywhere, but this is how they justified being in existence as part of a so-called radical left political movement. The most interesting move from SYRIZA, is that the party itself announce its support to some of the protests and the 24 hour general strike that is taking place in Greece today.
And these same people are mostly interested right now in maintaining their position of power for as long as they can in order to reap as many material benefits for themselves, their relatives and friends as they can.
It is a matter of thirst for power combined with opportunism for material gains and privileges.
Tsipras and his inner circle have shown their real face with the way they lied to the Greek people in order to get to power, the way they betrayed their former comrades, and the way they used those who were naïve enough to believe in Syriza’s vision and offer their help along the way as fellow travelers.
This is a government of party hacks that is now using all available methods to intimidate those opposing the government, especially business people and independent minded journalists, just like the Maduro government was doing in Venezuela.
Tsipras was never in touch with reality inside Greece while he was leader of the Syriza movement, so it should not be surprising that he has lost touch with social reality as Prime Minister.
As for many of his ministers and deputy ministers, their main concern is securing their future when they are out of power.
Many argue that protests and demonstrations against the current government will not only not go away, but will intensify in the days, weeks and months ahead.
Having said that, it will be the lethal shot for Greece, if the Tsipras government meets the same fate as Maduro’s regime in Venezuela, as this is the last chance for Greece to get it together and rebuild its economy before collapsing.