GRNews
GreekReporter.comGreek NewsEconomyTsipras Attempts to Please All Sides During Speech at National Bank of... 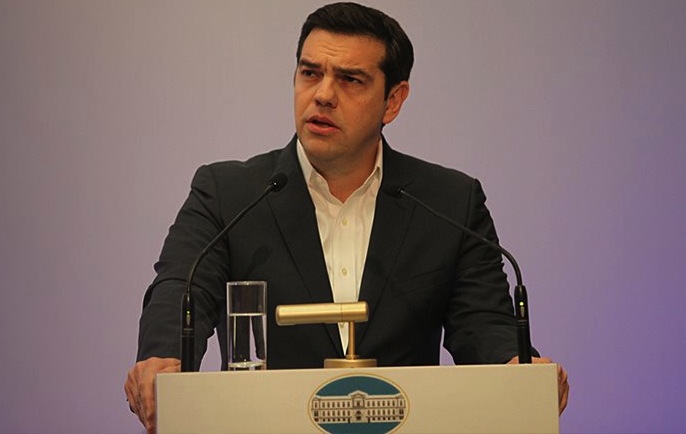 Greek Prime Minister’s speech on launch of the National Bank’s Act4Greece program had a bit of everything for everyone, thereby adding further weight to claims to Alexis Tsipras’ radical days are long behind him and that his main goal is to appeal now to voters from all segments of Greek society so he can maintain his grip on power.
However, another way to look at the Greek PM’s speech is that he is totally clueless about what needs to be done to end the terrible economic and financial crisis that continues to plague the country.
First, Tsipras highlighted in his speech that the healing of banks is the most pressing concern for Greece. He said that the accumulated problems of Greek banks restrict their ability to release funds to the real economy, but added that the successful recapitalization of the last months has renewed confidence among depositors who will now soon start returning their money to banks.
Tsipras then went on to say that the completion of the review process for the new bailout agreement is absolutely essential for the country’s prospect for economic recovery as it will led to the reinstatement of a waiver to allow Greek banks to swap the country’s government bonds for extremely cheap European Central Bank funding.
What this means, of course, although the Greek Prime Minister conveniently omitted this apparent truth from his speech, is that his government must be able to implement fully the terms of the third bailout plan, which includes additional austerity measures and harsh reforms.
Still, while the Greek PM viewed the role of banks as critical in re-boosting the economy’s engine, the main thrust for recovery, he said, will come from small and medium-sized enterprises.
At the same time, and without seemingly aware of how terribly sketchy his vision for economic recovery sounds in the context of being firmly rooted in a bailout plan that has proved disastrous so far, Tsipras added that his government’s overall goal is to prevent further disinvestment in the country, which he estimated to be worth 30 billion euros since 2007.
The Greek Prime Minister concluded his potpourri approaches for economic recovery by daring to say that he believes that the key to ending the crisis rests with providing support to the weakest elements of Greek society.
With his speech at the unveiling of the National Bank’s program called Act4Greece, Alexis Tsipras managed to show one more time that he is constantly engaging in efforts to broaden Syriza’s electoral support by appealing to voters across the ideological spectrum with vague pronouncements about the future of the country under his government, but didn’t offer concrete working solutions on hoe to get Greece out the crisis.