GRNews
GreekReporter.comGreek NewsEconomyGreek Government About to Begin Negotiations With Creditors

Greek Government About to Begin Negotiations With Creditors 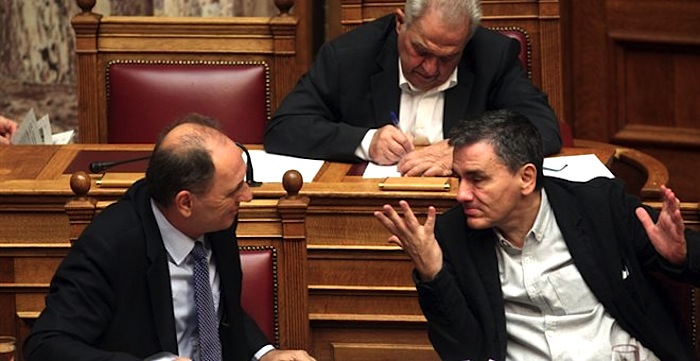 The Greek government is expected to start negotiation talks with Greece’s creditors this coming Monday, which will be completed in two rounds, according to officials from Greece’s Ministry of Finance.
The first round of talks will last only a few days, giving time for the officials from the so-called “institutions” to study carefully the proposals made by the Greek government and then return on a future date for the full completion of the negotiation talks.
A technical team of experts is already on ground in Athens, preparing for the arrival of the officials from the European Commission, the IMF, and the European Central Bank also known as Troika.
In the meantime, Greek PM Alexis Tsipras held “closed door” meetings with some of his key ministers taking part in the negotiation talks (Finance Minister Euclid Tsakalotos and Minister of Economy Giorgos Stathakis) as the current climate is anything but favorable for Athens.
According to reports, the Greek government is very concerned about the additional demands Greece’s creditors will make in connection to its own plan for pension reform. The Syriza – government is facing massive opposition to its proposed plan for the reform of the country’s ailing pension system and any demands for further cuts in pension benefits could make the situation simply explosive.
In addition, the refugee crisis has become the most crucial policy challenge for EU officials, which means that the Greek debt crisis is no longer as critical for European governments as it may have been in the recent past.
Still, the message coming out of the Greek PM’s office is that there are “red lines” when it comes to pension reform which the government will not cross. But this may nothing more than a PR scheme to appease, even temporarily, Greek public opinion as it appears to have lost completely confidence in the current government.