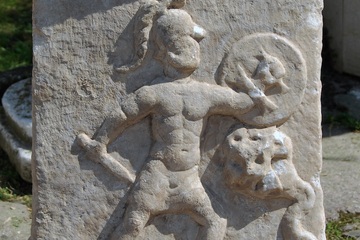 An ancient marble altar dating to the second century showing a nude warrior battling a serpent monster has been discovered by villagers near the Akcay River in Turkey.

The carved scene on the altar is difficult to interpret. Considering the fact that at the time of the altar’s creation, the Akcay River was known as the Harpasos River, archaeologists believe it may show a son of Hercules and a woman named Barge, named Bargasos fighting a monster in a battle that brought forth a beneficial river-god named Harpasos, to whom the altar is dedicated. An ancient town in Turkey was named Bargasa in the son’s honor.

The Greek inscription at the top of the altar reads “According to [a command in] a dream, Flavius Ouliades set this up to the [river] god Harpasos”.

It is stated that during this historic period the Romans had control of the area.

Hasan Malay, professor at Ege University in Turkey and Funda Ertugrul, an archaeologist with the Aydin Museum suggest that the altar might be depicting Hercules himself, stating that “the nude male warrior is shown wearing a helmet with a crest, holding a dagger in his right hand and round shield in his left. In the right lower corner is the depiction of a curving snake with many heads, a mythical beast called a Hydra”.

In ancient mythology, Hercules battled a Hydra serpent in a swamp in a region of Greece known as Lerna. After Hercules killed the monster, the swamp could be drained and cultivated to become something beneficial.