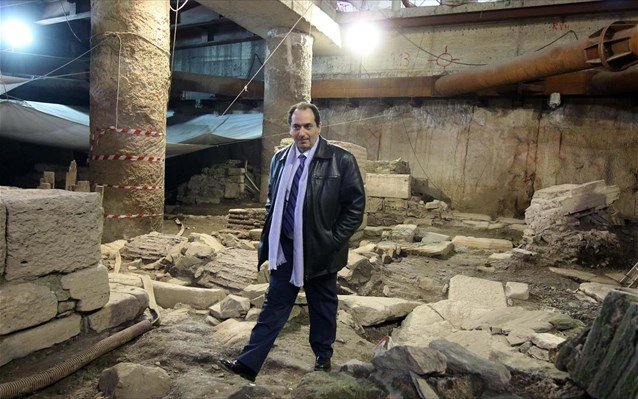 It is technically feasible to maintain archaeological finds unearthed during the prolonged excavations for a new metro in the northern city of Thessaloniki and at the same time to complete the necessary underground tunnels, Infrastructure and Transport Minister Christos Spirtzis said.
He made the statement while touring a metro construction site on Venizelou avenue, where the bulk of antiquities have been discovered. The relevant minister was accompanied by Thessaloniki Mayor Yiannis Boutaris and the chief executive of Attiko Metro – the company undertaking the project – Christos Tsitouras.
“The archaeological finds are very important … I believe archaeologists and the mechanical engineers will come up with the best solutions to secure everything you see around you, which is a treasure for Thessaloniki and the country, and … to build the station without harming the artifacts. I believe it’s technically very feasible and it will help the image of Thessaloniki,” the minister said.
(Source: ANA-MPA)

Greek, Armenian and Syriac genocide committed by the Ottoman Empire in the beginning of the 20th century were recognized by the Netherlands earlier in the week.
Greek church

The relatively young prelate reached out to the Greek Orthodox women of the Americas, telling them that he realizes without them, "our parishes would be dead."
Culture

Located off the northeast Caribbean coast of Venezuela is a state with the surprising name of "Nueva Esparta," or "New Sparta."