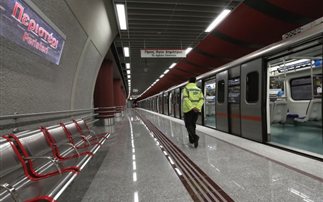 Greece ‘s independent privacy regulator, the Hellenic Data Protection Authority (HDPA) gave the Athens metro company STASY permission for the first time to install security cameras inside 17 new metro trains serving lines 2 (Anthoupolis-Elliniko) and 3 (Agia Marina-Doukissis Plakentias – Airport), on Friday.
The privacy authority had declined earlier requests made by STASY in 2013, when it allowed cameras to be installed on platforms only. According to the authority, the metro company had not fully justified the need for video surveillance on trains and had failed to demonstrate that the same goals could not be served by less intrusive means for passengers, such as security personnel patrols.
STASY applied again earlier in 2015, asking to install cameras in the 17 third-generation metro trains and demonstrating that it was not possible to have security personnel stationed along the entire length of the network. It also presented arguments that video monitoring and surveillance technology, while not in a position to avert all potential terrorist and other deliberate actions, were a substantial deterrent against actions against protected areas and would ensure a clear, constant and reliable image in cases of emergency or major incident.
They also noted that cameras will provide protection to the drivers and to security staff patrolling trains, allowing them to pinpoint threats on the trains and act as a deterrent against deliberate criminal or delinquent acts, increasing a sense of security among passengers.
The HDPA granted STASY’s request on condition that signs are put up inside trains where cameras have been installed, informing passengers that the cameras are present and of their rights. These include the right to access the stored data, while HDPA has stipulated that the video images should not be kept for more than 48 hours and that access to the material recorded is given only to authorised individuals, while access to the detachable data storage devices is only possible through the use of a mechanical key.
(source: ana-mpa)