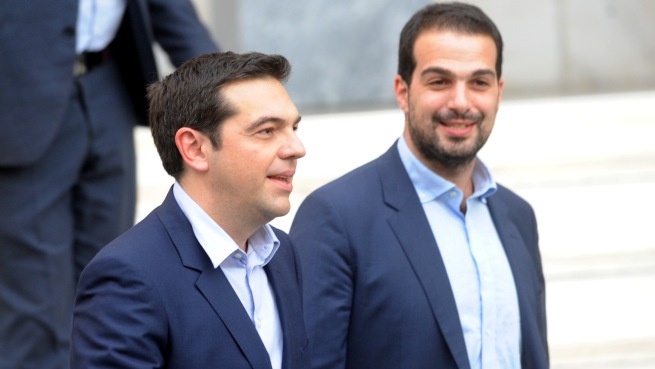 Prime Minister Alexis Tsipras asked parliament member Gavriil Sakellaridis to resign after the latter said he will abstain from Thursday’s vote on the omnibus bill that includes unpopular measures.
Sakellaridis had served as government spokesperson and deputy minister to the PM during the previous SYRIZA-ANEL coalition government term. He was tied with friendship bonds and political camaraderie with the prime minister, who had put him high on the electoral list in the Athens A Region in the September 20 elections.
The rumor that Sakellaridis was to abstain from Thursday’s crucial vote started circulating on Wednesday night. Reportedly, Tsipras called him and asked him if indeed he was intending to abstain from the vote. Sakellaridis reiterated his stance, saying he cannot follow the government policy. At that point Tsipras asked him to resign from his seat.
Sakellaridis accomodated the PM with a letter sent to Parliament President Nikos Voutsis. He said he is not planning to become independent or join the extreme leftist SYRIZA ofshoot Popular Unity. Therefore, Tsipras can replace him with another SYRIZA member.
Alternate Interior Minister Christoforos Vernardakis will take Sakellaridis’ seat in Greek Parliament, as he was next on the SYRIZA election list.
Sakellaridis’ resignation letter submitted to the House President reads as follows:
Athens, 11.19.2015
A few minutes ago I submitted to the House Speaker a letter of my resignation from office after I had informed the president and the secretary of the SYRIZA Parliamentary Group.
The reason for my motion is that I can not contribute to the implementation of government policy. The choice of resignation and withdrawal from the political scene is a one-way street for me.
I want to thank the citizens of the Athens A region for my election in January. All those who have worked together with me until today. I also want to thank the Prime Minister for the confidence to appoint me in a critical government position, but also for his understanding of my subsequent departure.
Obviously, I assume all responsibility for my ten-month parliamentary term.
Gavriil Sakellaridis
The Sakellaridis departure puts the fragile majority of the ruling SYRIZA-ANEL coalition at risk. With only 155 seats in the 300-seat Greek parliament, every vote counts in Thursday’s vote and all that will follow. The government has to implement several unpopular measures and reforms that has shaken the trust of Greek people.
Another possible lost vote is that of ANEL MP Nikos Nikolopoulos. The lawmaker has expressed the position that he will vote against the omnibus bill. ANEL leader Panos Kammenos told Nikolopoulos that he would have to give up his seat if he votes against the bill.
Under pressure from several coalition MPs who complained, the government has been forced to remove the article on the bill that is in regard to the excise tax on wine. A new measure needs to be found so that the government secures equivalent revenues.
However, the primary residence protection issue is one that doesn’t sit well with several SYRIZA MPs. Saving home loan debtors from foreclosure was one of the main election campaign promises the ruling party had made to voters. The bill protects only 25 percent of homes, those of the poor and the unemployed.