GRNews
GreekReporter.comGreeceDon't Blame Greece or the Muslim Community for the Paris Attacks

Don't Blame Greece or the Muslim Community for the Paris Attacks 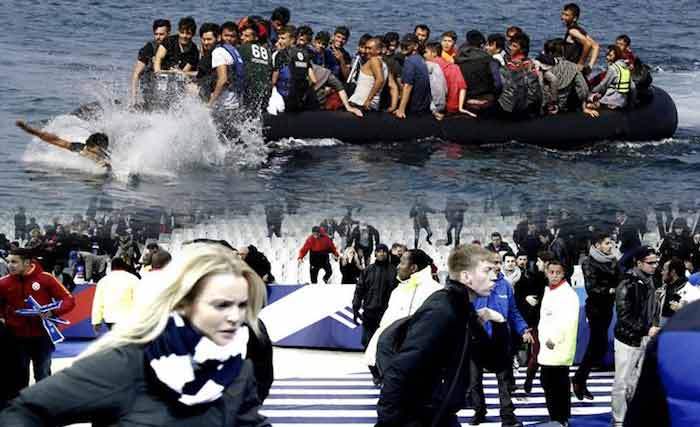 It was November 14, 2015 that news broke out that one (if not two) of the assailants in the Paris attacks had passed through Greece, as a “refugee” using a Syrian passport. The Paris attacks, tragically, left 129 people killed and 352 injured, and wide spread rhetoric for and against Greece’s current handling of the refugee crisis ensued.
Blame was placed on Greek politicians for allowing such terrorists to enter the country so easily. In opposition, individuals cried out for us to not blame Greece, as if dealing with 5,000 daily refugee arrivals isn’t enough, although pointedly, a better plan should be put in place. It was Greece’s Migration Minister, Giannis Mouzalas that warned in early September 2015 terrorists had indeed entered Greece. “It would be foolish to say that no jihadists have entered the Greek border,” Mouzalas said. In dealing with such a refugee influx one or two seemingly innocent individuals might slip through the cracks. No one would have thought them to be conspirators in one of the most strategic and deadly terrorist attacks known in modern-day history.
A possibly lesser known development is at least 5 of the assailants thought to be involved in the Paris Attacks were French nationals. In our current strife, sometimes it is easier to point fingers, to meet attack with attack, to crush the opposition, or as Francois Hollande exclaimed, say this is “an act of war” and the Muslim community fear that they just might be retaliated against in individual efforts to enact justice.
According to a Reuters report French Prime Minister Manuel Valls said on RTL radio, “we are going to live with this terrorist threat for a long time.” The Islamic State, which claimed responsibility for the attacks in retaliation for French airstrikes in Iraq and Syria, warned in a video on Monday that any country hitting it would suffer the same fate. French warplanes bombed Islamic State training camps, its biggest such strike since it started assaults as part of a U.S. led mission launched in 2014.
Continuing from Reuters, French Interior Minister Bernard Cazeneuve told reporters that French police conducting raids had already arrested nearly two dozen people and seized arms, including a rocket launcher and automatic weapons, in 168 raids overnight. Another 104 people were put under house arrest. “Let this be clear to everyone, this is just the beginning, these actions are going to continue,” Cazeneuve said.
Should we fight fire with fire? It hasn’t exactly worked in the past as the countries of Iraq and Afghanistan show proof of this and people on the ground continue to flee. We must remember that this is not the first wave of immigrants forced to leave civil unrest. In fact it was Syria that was the refuge for many Greeks fleeing prosecution in 1923, after the Asia Minor Catastrophe, and during the forced exchange of population between Greece and Turkey, as agreed upon under the 1923 Lausanne treaty. It is possible that the future may require European nationals to flee from unrest again like those currently fleeing from the Middle East, although we hope history will write a different script.
The Paris Attacks are an atrocity, to Greece, its people, and the general and collective global community. It is no less an atrocity to the Muslim community. Stand in solidarity with those injured, those who have passed on, and those still fighting for life, but also stand in solidarity with the true state of Islam. As the French student Muslim community (EMF) expressed in a video immediately after the attacks “Nous Sommes Unis,” We Are United.
If we do not learn from history we are doomed in fact to repeat it.