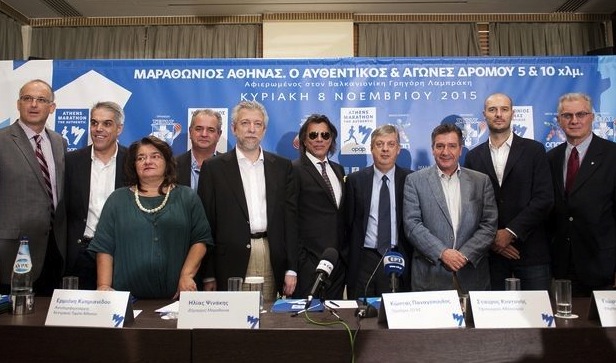 Athlete participation in this year’s 33rd Athens Marathon held on November 8th is expected to reach new record highs, the president of Greek athletics federation (SEGAS) Kostas Panagopoulos said at a press conference on Thursday. The Athens Marathon is the top sporting event in Greece.
Panagopoulos said organizers expect 40,000 athletes, 6,500 of which are foreigners – 1,500 more than last year. Of the 40,000 runners, 16,000 will participate in the Marathon race while the others in the various shorter races taking place simultaneously in the city.
He also said SEGAS decided this year not to invite top athletes who would raise the budget of the event, so as to increase revenues directed to social purposes.
Deputy Sports Minister Stavros Kontonis welcomed the event and noted the efforts made to reduce expenses in sport events due to the bad economic situation in Greece. He called on Greek businessmen involved in sports to pay the amounts they are due to pay from the use of stadiums and public spaces.
The press conference was also attended by Athens Mayor Giorgos Kaminis, Marathon City Mayor Ilias Psinakis and the General Marketing Manager of OPAP, Petr Matejovski.
(source: ana-mpa)