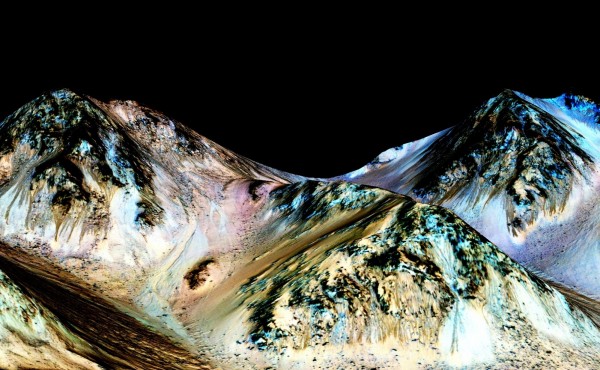 Greek astrophysicist Dionysis Simopoulos said that the discovery of liquid water on Mars increases the possibility of existence of life on the planet now or in the past.
Simopoulos, who is honorary director of the Eugenides Foundation Planetarium, said that the large quantities of water in the subsoil raised hopes to pinpoint potential, microbial at least, living organisms, or fossils.
Until now we knew that one billion years ago vast quantities of water flowed on the surface of the planet, after scientists had observed apparent corrosion caused by the flow of huge rivers. The thousands of photographs of previous research had captured hundreds of characteristics resembling dry riverbeds, some of them stretching for 150 kilometers or more, Simopoulos explained.
There are indications of torrential rains, dry channels five kilometers wide and sandy beaches similar to those of rivers on Earth, large lakes or even oceans with large quantities of water that lasted but a very short time, he added.
Another recent discovery was the identification of enormous quantities of water in frozen form in the planet’s subsoil. If these quantities are melted, they could form an entire ocean covering the whole of Mars to a depth of 500 meters.
Both quantities of water could serve to future guests of Mars for the needs of their greenhouses, their daily supply, to produce rocket fuel (hydrogen – oxygen), and also for the future transformation of Mars into a habitable planet for humans in less than 1,000 years, Simopoulos continued.
In addition, Simopoulos said, Mars exploration has shown that Martian atmosphere is very thin, there are weather fluctuations and winds, ice on the poles, vast canyons and very high summits.
Mapping the red planet has also shown a giant crater named Hellas that is eight kilometers deep and has a diameter of 2,300 kilometers. A mountain that has been named Olympus is the tallest in our solar system and it is three times higher than Everest. If that mountain was on Earth, Simopoulos said, its base would cover the whole of Greece and the Aegean Sea as well.