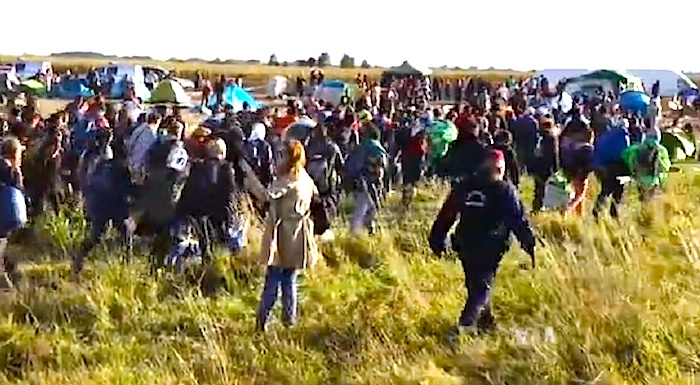 Hungarian police on Monday struggled to control refugees entering by the thousands at Hungary’s border with Serbia.
Police kept a large group of exhausted and anxious refugees in a holding area, a few meters from a gap in the border fence where a rail line linking Serbia and Hungary passes, and where most refugees have been entering on foot. When buses arrived to begin loading the refugees to take them to a registration center, hundreds of them stampeded.

Some tried to board the buses, while others set out on foot on the highway to Budapest, where many hope to catch trains to the Austrian border and on to Germany.

“Every day, thousands of people come across. Only today, it’s more than 2,000 people who have crossed this border line, which means they have entered the European Union,” said Kristof Gancs, a spokesman for Hungarian Interchurch Aid, a relief organization. Gancs and other relief workers gave directions to the migrants arriving on foot along the railroad tracks, some pushing strollers with babies and elderly people in wheelchairs.

Refugees interviewed all told similar stories of fleeing war in their homelands. “I really want to go to a place where I could be alive, to be alive,” said a refugee from Afghanistan as he approached the police holding area from the border fence.

Relief workers also tried to calm the nerves of some migrants who feared Hungary would send them back.

In a policy shift, Hungary is now granting passage to the Austrian border for those who state they are refugees and not economic migrants. In the process, Hungarian officials are taking their fingerprints and holding them at registration centers while their status is determined and decisions are made whether to send the migrants on to the Austrian border or return them to Serbia.

At a gap in the border fence, on the Serbian side, a group relaxed and roasted corn on a campfire.

“They’re waiting to decide whether to enter Hungary illegally or not, because if they enter, then their fingerprints will be taken and they will be registered in Hungary,” said Momand Ferdaus, a volunteer. “The migrants, they don’t actually know clear enough what’s going to happen to them once they enter Hungary.”

The path along the railroad tracks was littered with torn migration documents from Greece. Many of the migrants tried to destroy any evidence of their prior presence in the European Union, in the belief that it might somehow be cause for Hungary to deport them. Most want to go to Germany via Austria.

There is only so much relief workers can say to reassure the migrants as EU governments decide how to deal with the influx.

“It’s changing from day to day,” said Gancs. “Right now Germany says everyone from Syria is a refugee and they’re welcome there. This means they won’t be sent back to Hungary. This is the situation now. We don’t know how long it will last.”

On Monday, both France and Britain agreed to accept thousands of people from the war-torn Mideast. But the numbers they have agreed to take in — France said it would take 24,000 over the next two years; Britain, 20,000 over the next five — are dwarfed by the sheer masses of migrants streaming in.

Germany has said it is willing to accept 800,000 migrants, many of whom already have relatives in the country and are being urged to join their families there. Europe’s wealthiest country, Germany also said Monday it is making an additional $6.6 billion in public funds available next year to absorb the refugees into German society.
(source: VOA)

It was announced on Wednesday that Greeks have cut their smoking by more than one half over the last decade, according to a new ELSTAT survey.
Canada