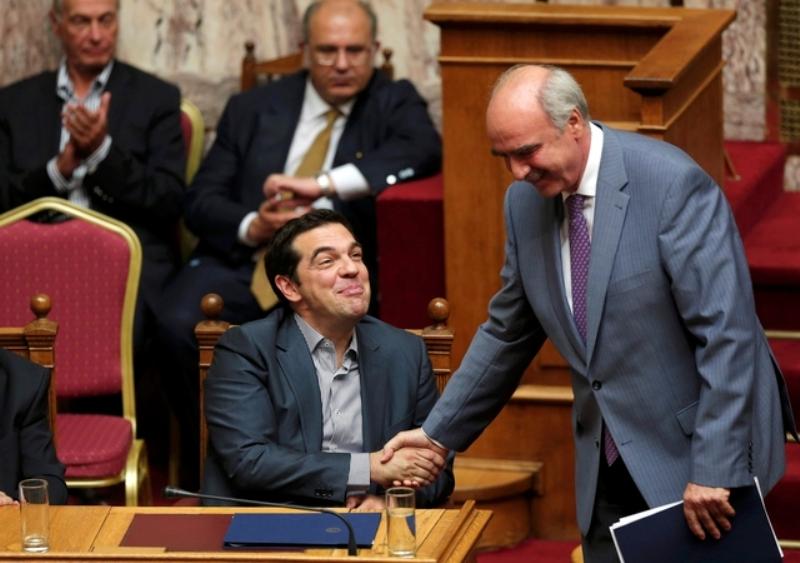 In Greek politics, a statement that is repeated very often usually has the opposite meaning of what the politician says. For example, when a politician says “no new taxes,” rest assured that you will be bombarded with taxes when he takes the seat.
Alexis Tsipras never tires to repeat there is no way he will form a coalition with New Democracy if election results do not give him enough parliamentary seats to form government. He considers the rightist party represents all that is old, tired and corrupt in Greek post-dictatorship politics.
ND chief Vangelis Meimarakis, on the other hand, seems to be begging for a coalition with sworn enemy Tsipras. Despite the fact that he is accusing him of destroying the Greek economy after a seven-month SYRIZA-ANEL rule, Meimarakis plays the big-hearted patriot who is willing to sacrifice his party’s credibility by sharing the governing of the country with the “lying,” “incompetent,” “amateur,” “immature” (his words) Tsipras.
Of course Meimarakis wouldn’t have been so generous, altruistic and patriotic if he had a clear lead in opinion polls. He hasn’t. In fact, most of the polls show SYRIZA ranking first, even if the difference between the two parties seems marginal so far.
Tsipras appears over-confident that SYRIZA will get enough votes so that he can collaborate with a small party — he said he prefers ANEL who followed his policies blindly in the past seven months — and form a coalition.
Tsipras has excluded all other parties for a possible post-election collaboration. In reality though, unless polls are way off, his percentages and the percentages of ANEL combined barely make the 151 seats needed to form government. And even if they get 151-160 seats, the coalition will be more shaky than any government formed after the economic crisis hit Greece.
However, at this crossroads, the country needs a strong government that would have the strength and determination to implement the third and — let’s face it — final bailout deal.
Despite their huge differences, SYRIZA and New Democracy may have to do the unthinkable in a country that loves to be polarized: Govern together. Or get the other two pro-Europe parties (To Potami and PASOK) on board and form a four-party government that will endure the tough consequences of the reforms required by the third bailout program.
After Tsipras signed a bailout agreement — an abominable “memorandum” — all parties of the right, center and left have signed one. The “anti-memorandum” rhetoric that has polarized Greek people is dead. It’s time then for all pro-Europe parties to forget the empty talk and finally get together and implement the growth reforms the country needs.
After all no one loses because the four parties will share the blame and political losses equally. Because no party alone can face the rage of Greek people when the new tax forms arrive in the mail a few days after elections.
And on top of that, Greeks may finally unite in the common cause of pulling the country out of the economic crisis. If they realize at last that Greece’s economy is more important than obsession with a political party.