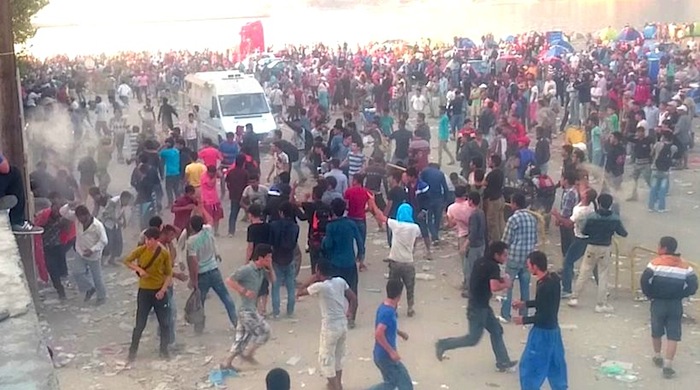 Greece’s Coast Guard with the help of police on Friday morning made use of stun grenades to deal with the uprising of about a thousand refugees at the port of Mytilene, on the island of Lesvos.
Thousands of refugees are stuck at the port of Mytilene since the number of ferries that can carry them to the ports of Piraeus or Thessaloniki. On Friday morning, about a thousand of them, with most of them being Afghans, tried to take over a ferry.
While shouting “Athens-Athens,” the refugees stormed Blue Star 1 ferry. The ship crew raised the passageway trapping hundreds of regular passengers who had already embarked, among the refugees.
“This happens every day,” said Mytilene Mayor Spyros Galanos on Greek television. “I have requested ships and chartered planes to transfer them but they won’t provide them… I have asked to call the situation as a ‘state of emergency.’ They won’t do it. The situation is out of control,” he added.
Thousands of refugees and migrants are temporarily trapped on the island and they are getting irate as their documents are not processed quickly enough so that they can move on to the destination of their choice.
“The number of refugees is lost, it’s out of control. There is danger that a spark may start a big fire. I have tabled proposals, I even called on mayors in Turkey and Europe and tabled proposals, but no one is listening. They are trying to turn a national issue to a political issue,” Galanos said.
Migrants removed from Mytilene port
Some 10,000 refugees and migrants were led from the area of the port of Mytilene to an open space near the beach “Tsamakia.” Men of the Coast Guard and the police forced the refugees and migrants to leave the area of the port and lead them into the open space of “Fykiotrypas,” located a few hundred meters from the port.
Meanwhile, Eleftherios Venizelos ferry arrived at Piraeus Port at 10 am on Friday carrying about 2,504 refugees and migrants from four islands of the Eastern Aegean Sea.

Greece is seeking 1 billion euros for refugee crisis
The financially strapped country says it needs more than 1 billion euros to deal with the current refugee crisis.
The estimate was given on Thursday by Greece’s interim economy minister, Nikos Christodoulakis. Greece says it has seen over 230,000 refugees and migrants enter the country this year, most coming by sea to its eastern islands.
Christodoulakis said that at the moment the Greek government is completing procedures to receive money from nine different European funds, seeking 400 million euros from the asylum fund and 330 million euros from a fund for the poor.