GRNews
GreekReporter.comGreecePapa Stratis the 'Savior' of Refugees in Lesvos Passes Away

Papa Stratis the 'Savior' of Refugees in Lesvos Passes Away 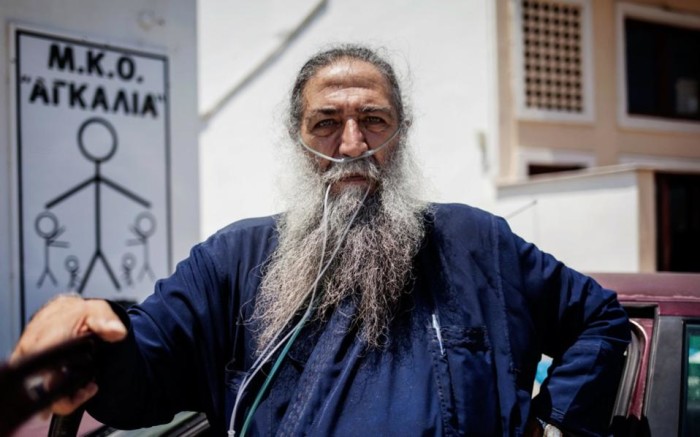 Greek Orthodox priest Papa Stratis was only 57 years old but the work that he left behind changed the lives of many people and will be remembered forever. The Greek priest, also known by the name Efstratios Dimou carried the Cross of thousands of people, helping migrants and refugees who arrived on the Greek island of Lesvos.
He founded the NGO Agalia (Embrace) which offered comfort and medical assistance to the thousands of migrants and refugees in Lesvos.
Papa Stratis suffered from chronic respiratory problems, and he was on permanent oxygen supply, but that never stopped him. He worked tirelessly to rescue the migrants for many years. He was a pioneer inspiring hundreds of people.
“What I see are people. People in need. I cannot turn them away, nor can I kick them, nor imprison them,” he told Amnesty International in an interview a few years ago. “I cannot send them back to where they came from. Nor can I throw them in the sea to drown.”
“I have seen young children with blisters on their feet and pregnant women holding their bellies and crying from pain. These people are not migrants, they do not choose to come here. They are the children of war, fleeing from bullets,” he added.
Papa Stratis passed away on Wednesday, September 2, after slipping into a coma. His cancer may have defeated him, but before he left he had already won other, more important battles.