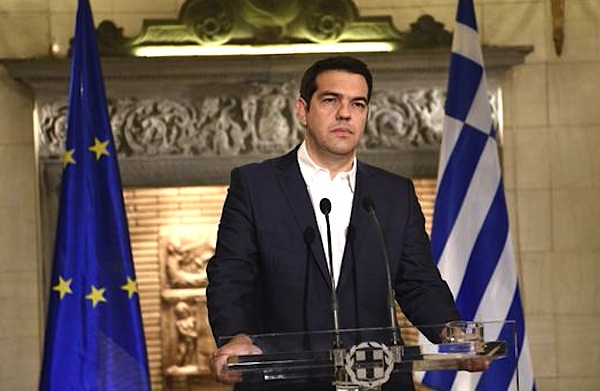 Greek Prime Minister Alexis Tsipras announced early elections on September 20 asking Greek people to give SYRIZA a fresh mandate for a “free, democratic and socially just Greece.”
In his 14-minute speech Tsipras reviewed and praised the Greek government’s work in securing a new bailout agreement that saved Greece from bankruptcy. He said the agreement was the result of the determination of the Greek people and that 23 billion euros have already been disbursed for the recovery of Greek economy and bank recapitalization. He also criticized the SYRIZA dissidents for wanting a rift with Europe and return to the drachma.
“We didn’t achieve the deal we were hoping for, we had to make concessions, we were forced to by the circumstances. It was the best agreement we could make and now we must fulfill our duty,” he said.
“We won many things in negotiations and we managed to avert several illogical demands in labor market laws or pension cuts. We said no to mass layoffs in the public sector, we rehired the cleaners and school guards, we said no to the 5-euro hospital admission. We managed to avoid fiscal demands of 20 million euros. Also, it is agreed to negotiate Greek debt relief,” he continued.
“It is my political and moral obligation to ask you, the Greek people, to decide how we will move from now on. You will judge, through your vote, if we fared right with creditors, you will judge if we can implement the new reforms. You will decide who will proceed with the changes and reforms the country needs,” Tsipras stated.
“You will judge the stance of those who claim ideological consistency and righteousness and want us to have bailout agreements but with the drachma as national currency. Those who turned a majority leftist government into a minority government,” he further stated.
“During these months we made Greece a global concern, we sent the message that austerity in Europe is not the right strategy. We are protagonists in the future of Europe. I asked the European Council to be part of the bailout program review, to be ever present in Greece and monitor the progress of reforms,” he said.
“Now we have many fights to give, against corruption and injustice, against tax evasion and bureaucracy. All these require a fresh people’s mandate,” he continued.
“I will ask the Greek people to vote for us to govern for a free, democratic socially just Greece. We will not give up our values to no one. The best days are ahead of us. I invite you to fight with us to keep democracy and Greece in our hands,” he concluded.
Tsipras then went to the Presidential Mansion to submit his resignation to President of the Hellenic Republic Prokopis Pavlopoulos.
The elections day was decided during a meeting in parliament between the cabinet and key SYRIZA lawmakers. It was stressed that the election campaign period should be short.
The idea that elections should be held immediately was supported by key cabinet members such as Energy Minister Panos Skourletis Justice Minister Nikos Paraskevopoulos and Eurpean MP Dimitris Papadimoulis.
The SYRIZA Political Secretariat will meet on Friday at 2 pm.