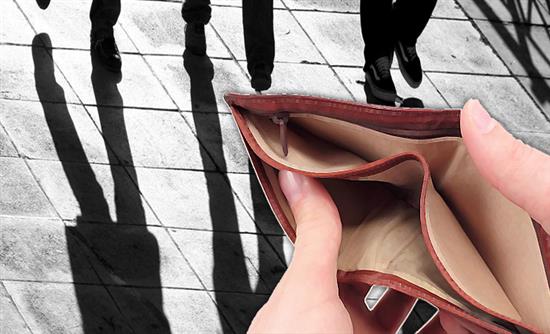 The General Confederation of Greek Workers (GSEE) labor union published a report regarding the rapid deterioration in the economy’s key indexes. The report has already reached the hands of the Greek Prime Minister, the Bank of Greece (BoG) Governor, as well as the political party leaders, so that the data can be used in the negotiations between Greece and the creditors’ representatives, who are insisting on new painful measures in the social security and labor sectors.
The number of Greeks living in poverty has doubled in recent years. As a result, four in ten Greeks have a disposable income below the corresponding poverty line set in 2009.
In 2009, the percentage of full-time employees living in absolute poverty stood at 7.6%, while in 2012, it rose to 19.7%. For self-employed full-time workers, the same percentage in 2009 was estimated at 23.5%, while in 2012 it had risen to 37.4%.
The rates were even higher for part-time employees, with the percentage of people living in absolute poverty at 30.1% in 2009 and 51.7% in 2012. Furthermore, the GSEE study also noted that part-time employment is constantly gaining ground. The rate rose significantly from around 6% in 2009 to 10% in 2014, while the percentage of people who work part-time involuntary stands extremely high at around 70%.
Meanwhile, the number of unemployed has quadrupled, rising from 364,000 in the third quarter of 2008 to 1.34 million in the first quarter of 2014. At total of 34.8% of the unemployed in 2009 lived in poverty, while the number rose to 65.5% in 2012.
GSEE proposed redesigning the funding of the country’s liabilities and debt sustainability assessment in order to kickstart the domestic demand by increasing investments.