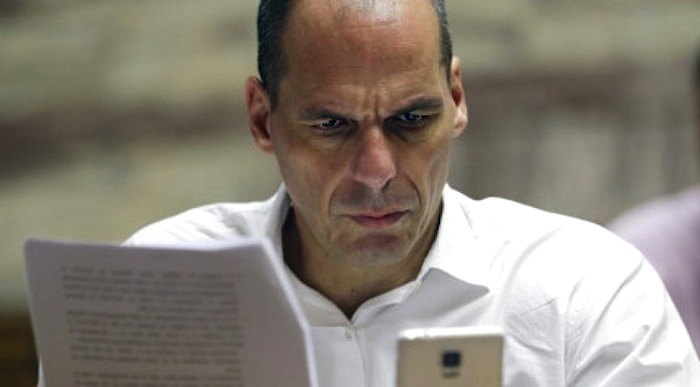 Greece’s Supreme Court forwarded two lawsuits filed by Greek citizens against Yanis Varoufakis to parliament, which must now decide whether the former Minister’s immunity should be lifted so tha he can stand trial.
The lawsuits were filed by Stylida Mayor and “Teleia” party head Apostolos Gletsos and lawyer Panagiotis Giannopoulos. The two men filed the lawsuits after the tapes of a Varoufakis speech revealed his scheme to set up a secret parallel payment system and push for the return to a national currency.
The former Minister’s plan created an uproar among opposition parties who demanded that Varoufakis is kicked out of SYRIZA. Some PMs even accused him of treason, while several coalition MPs openly criticized Varoufakis’ statements and suggested that the Prime Minister removes him from the party.
Varoufakis defended himself speaking to The Financial Times on Tuesday, saying that all he wanted was to generate a scheme that would help Greece overcome liquidity problems. However, the plan included hacking in to taxpayers’ accounts.
“Given the absence of a central bank to support the state’s endeavors, the Greek government’s arrears to the private sector (individuals and companies) have been perpetually deflationary since 2008,” argued the former Finance Minister.
“Arrears… consistently exceeded 3% of gross domestic product for five years. Meanwhile, a feedback effect boosts tax arrears which, in turn, reinforce the cycle of generalized liquidity,” he said.
“Our simple idea was to allow for multilateral cancellation of arrears between the state and the private sector using the tax office’s existing web-based payments platform,” Varoufakis explained.
“A reserve account could be created per tax file number on the tax office’s web interface and be credited with arrears owed by the state to that individual or organization. Tax file number holders would be able to transfer credits from their reserve account either to the state (in lieu of tax payments) or to any other tax file number reserve account,” he said.
Varoufakis went on to blame creditors for Greece’s financial woes and put most of the blame in Eurozone policies and practices: “There is a hideous restriction of national sovereignty imposed by the Troika of lenders upon Greek Ministers who are denied access to departments of their Ministries, pivotal in implementing innovative policies.”
“When sovereignty is lost, due to unsustainable official debt, yields suboptimal policies in already stressed nations, one knows that there is something rotten in the euro’s kingdom,” he said, paraphrasing Shakespeare.