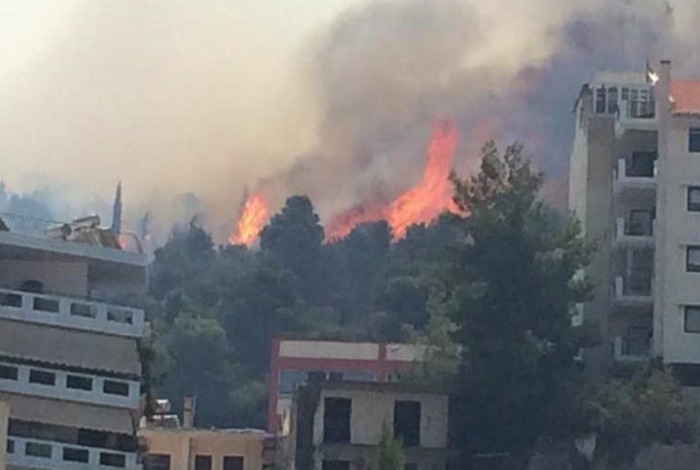 At least six wildfires broke out across Greece on Friday, July 17. The first large-scale fire occurred in Laconia, Peloponnese, where firefighters are still trying to get the situation under control using land vehicles and Canadair aircraft.
More than two villages, a children summer camp and several touristic areas have been evacuated, while the fire is quickly spreading toward Neapoli, where citizens have evacuated the city suburbs and Health Center.
A helicopter that was operating against the fire was saved from a fatal crash by a Greek hero pilot.

As #fires spread across #Greece, #Greek #Hero Pilot saves his life, crew and helicopter averting a fatal crash in the Peloponnese. Get the full story –> https://greekreporter.com/2015/07/17/wildfires-spread-across-central-greece/
Posted by Greek Reporter on Friday, July 17, 2015

Later in the day, another two wildfires broke out in Kareas and Koropi, Athens. The Kareas fire has spread toward the districts of Ymittos, Vyronas and Argyroupoli. Residents are helping firefighters in an attempt to save their homes and businesses.
No injuries or deaths have been reported yet, but, according to Greek media, a house and a local restaurant have been damaged by the fire.
A fourth wildfire occurred near Chalkis, Euboea, where the village of Afrati was evacuated and residents were transferred to safety. According to Greek authorities, the fire continues to blaze out of control. The local mayor warned that the situation is crucial since the fire is burning on a very big front, about 600 meters from the village.
Very strong winds are blowing in the area, covering it in smoke and spreading panic on local residents.
Early in the afternoon, a fifth wildfire broke out in Malakasa, near Athens, and a sixth one is currently spreading across Argolis, Peloponnese. The fire department does not yet have a clear picture of the situation in these areas.