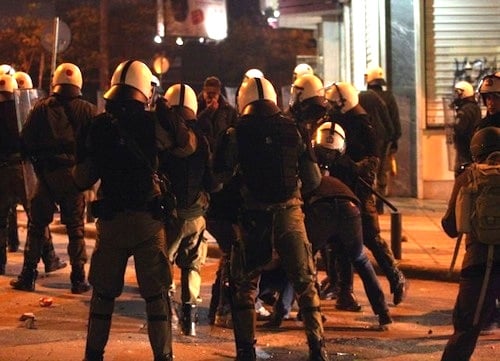 Greek police are taking precautionary measures in order to prevent any anarchist or anti-authoritarian attacks to government or state buildings. The groups are disappointed with Greek Prime Minister Alexis Tsipras’ agreement with the European creditors which will result in even more austerity measures.
Authorities received information stating that state building could be targeted on Wednesday, when the Greek Parliament will vote on the new austerity measure legislation. Greek police are closely monitoring SYRIZA’s headquarters in Koumoundourou Square which was occupied, in March, by anti-authoritarians, demanding that the government respond to the requests of several jailed hunger strikers.
Furthermore, the Greek police anti-terrorist unit is concerned that tensions will rise in the city center on Wednesday evening. They are prepared to face any type of attack, from urban guerrilla groups reacting to the social and political situation, to a bomb attack.
Finally, they are on alert in order to avert any potential upheaval in the city center, during the Parliament session that will vote on the new austerity measures.