GRNews
GreekReporter.comGreek NewsEconomyWant to know how Greeks see the future? Get in the ATM...

Want to know how Greeks see the future? Get in the ATM queue and ask them 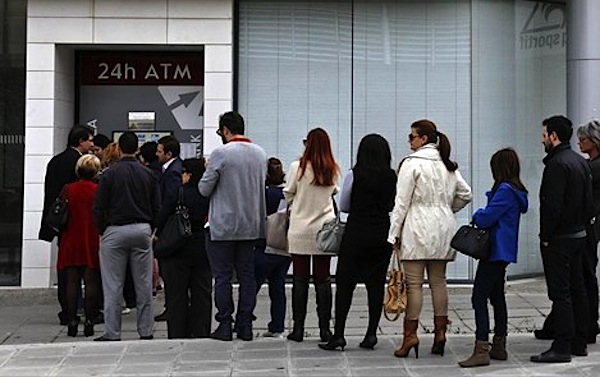 By Dimitris Dalakoglou*, University of Sussex
If one was following Greek and international media, it might have seemed as though the difference between the numbers in the Yes and No camps in the Greek referendum was tiny. However, as most ethnographers of Greece would be able to tell you, especially the ones who have spent two years doing research in Athens during the crisis, the No voters were in the overwhelming majority. And so it ultimately proved in the result.
One of the most grotesque moments in the festival of pro-Yes propaganda hosted by Greek TV channels came when a Mega Channel journalist attempted to interview a pensioner in Athens about his views on the debt crisis. The journalist had been expecting the elderly man to complain about the terrible queues at the banks. Instead, the man began to comment on how the crisis has caused thousands of suicides and that he supported the decision to let the people decide. Having failed to get the answer he was looking for, the journalist simply pushed the man out of the frame and quickly began talking over him, while the camera panned away.


Probably one of the best places to understand what is going on in Greece at the moment is in the queues forming at the ATMs of closed banks. People have to wait longer than usual to withdraw cash, and with a daily limit of €60, they are queuing more often, so while there, they just chat with each other spontaneously. Others join in the conversation until you have a small assembly. People address the “audience” loudly, agree and disagree, add comments on top of the main debate and splinter off into their own, smaller groups in the queue. Sometimes people stick around to talk even after they have withdrawn their 60 euros from the ATM.
They talk about their fear but also about their anger. They are angry at the private TV channels and newspapers that spread fear ahead of the vote. They are angry at Greece’s creditors and resent the euro as a currency. In the queue, the conversations are often about the real value of the euro. People still loudly translate their 60-euro allowance into the old Greek currency. They talk about how much they could buy with 20,000 drachma and how little they can get with 60 euros.
They also remember the last time a significant percentage of people in Greece lost substantial amounts of their savings. That was in 1999 when the Athens Stock Market collapsed, just before Greece joined the euro. The government, led by technocrat Costas Simitis had liberated the financial markets as part of the eurozone integration process.
People were encouraged to invest their savings in the financial market via governmental (and TV) propaganda. Small stock market agencies sprung up in towns and villages to help them on their way. The TV sets in the traditional Greek coffee shops broadcast stock market sessions and pink newspapers appeared on the tables. A country with 10 million people was suddenly home to more than 1 million stock-market investors.
Then came the crash. The market collapsed under the weight of several corporate manipulations and investors saw their savings vanish.
At the time, there was enough going on to distract people from the blow. The change of currency to the euro and the devaluation effect made the loss of trillions of drachmas look relatively less significant. People still recall how things that cost 100 Drachma or less quadrupled in value overnight and suddenly cost a euro.
This time around, there are no distractions. But although people fear losing their deposits while the banks remain closed – as happened in Cyprus – the fact is, very few people have much of a deposit to lose.
Beyond what people are talking about as they queue for the ATM, social theory teaches us that large groups with little to lose are a traditional danger for capitalist projects.
The threat they pose was temporarily diffused by the referendum, as they had the chance to express their discontent, but the result makes it clear that they will not be placated for long. The resounding No vote has emerged from a population with no faith in the neoliberal economic system or the mainstream media that presents it to them. They voted no because people are ready to risk losing things in order to win a new political and social deal– especially when what they have to lose doesn’t amount to much.
*Dimitris Dalakoglou is Senior Lecturer in Anthropology at University of Sussex. This article was originally published on The Conversation.