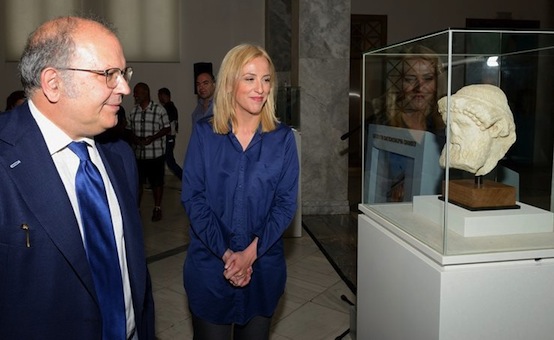 At the presentation of an ancient marble head depicting the god Hermes, returned to Greece on Monday from Bonhams auction house as the product of illegal antiquities smuggling, Greek Alternate Culture Minister Nikos Xydakis said it is proof of what Greece’s archaeological service can accomplish.
“This is a reply to some of the exaggerated claims that we don’t pursue stolen or auctioned [antiquities],” the Minister said during the ceremony for the head’s return at the National Archaeological Museum of Athens.
He noted that the case was unprecedented because the artifact had not been on any of the archaeological service’s lists and the evidence showing it was illegally exported had to be put together from scratch but was sufficiently strong as to convince the auction house.
The ancient marble head, about 24 cm high, is a unique Roman-era work of art that was pulled out of a Bonhams auction just a few months ago. It is a Roman copy of a major Classical-era Greek sculpture by Alkamenes, originally in the south wing of the Acropolis Propylaea.
In October 2014, it was discovered that the head was among the works put up for auction by Bonhams and was withdrawn after the Greek Culture Ministry intervened.
Xydakis stressed that Greece’s efforts for the protection of its heritage are constant and in recent years have given the country considerable prestige and influence within international organizations. He also noted that changes during the EU presidency of the European Council have strengthened the EU legal framework for the return of stolen antiquities.
(source: ana-mpa)